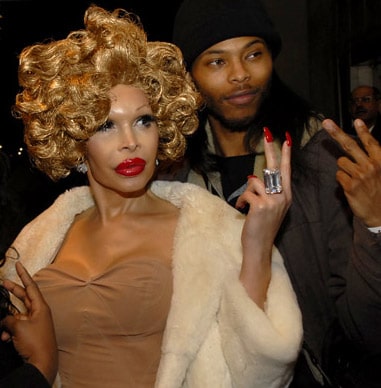 Call her beyond life size, freak, transcendental icon, night life host impresario, seductress extraordinaire, pop star or savvy business woman galore this femme fatale has us wondering if you’ve all got it wrong and somehow right too. More real than what meets the eye and a natural star we walked away thinking there’s more than a woman when it comes to Amanda.

The first thing you notice when you lock eyes with Amanda are the very high cheek bones, her ruby rotund lips, the platinum blonde hair and the visage between her breasts that goes three times beyond Marilyn Monroe’s. Then again this is Amanda and I am sitting there at some none descript diner drinking chamomile tea when she finally saunters over to introduce herself to me. Hollywood it ain’t but who wants Hollywood when Amanda pulls up a chair next to you?

Amanda: I’m so sorry I’m late, the phone hasn’t stopped ringing all day, and I’m suppose to go away again, I’m not sure where and I wanted to get to the gym.  I just couldn’t find my running shoes.

I’m sitting there watching a very unique legend, those giant lips, a woman who wasn’t always a woman, but in so many ways (as I soon find out) is beyond it all, and being simply who she really needs to be. Who she really is though is what I aim to find out.

SCV: Running? You like to go running? (for some reason it’s momentarily hard to imagine the visage of Amanda running, and really why bother?)

Amanda: Running? Oh no, I had to give that away, it’s not very good for one’s gravity, if you know what I mean….(we both do a double take at the Grand Marilyn Monroe Valley sitting there in front of us, bountiful and as perky as ever).

SCV: Yes, one need to take precaution. (pause). What makes you a star?

Amanda: Is that what they say? I don’t know, just being me.

SCV: But you always weren’t you?

Amanda: That’s a state of mind. I was always me, it’s just I was in the wrong body and living in a culture, a particular way that inhibited one from being who they needed to be.

SCV: Who did you need to be then?

Amanda: A very pretty girl. No, if you really ask me- I needed to be me. There’s a saying that goes- “You are who you pretend to be, and if you are going to pretend you might as well be the real thing.”

SCV: What’s real for you?

Amanda: The way I feel, the way I express myself. We live in a culture where everything is man made, devised for a particular look, sensibility, and I think it’s important to figure out who you really are for yourself and to let everything else go by the wayside.

SCV: Isn’t that harder to do, owning up to you, even it means coming off as a freak show?

Amanda: The real freak show is not living for yourself, pretending to be who you really are not. It’s just too prevalent in our culture, and people get themselves in so much trouble.

SCV: Isn’t that a brave choice?

Amanda: Actually, it’s not. It makes it easier for me, I am spared all the conflict, I just own up and get on with the job, there’s nothing to ever fight about.

SCV: Tell me about the some of the surgery you had? Some would say it’s excessive.

Amanda: Well if you’re going to be a transsexual, which means taking some corrective surgery then it’s not. And of course it was important for me to perfect the look, make myself look the way I felt inside. Give a softer glamour focus, and all I wanted to do was correct it.  For a transsexual I am pretty conservative…

SCV: Who have been some of your strongest influences in your life?

Amanda: Definitely David Chapelle (film maker and photographer connected to Andy Warhol). He taught me to be successful you didn’t need a lot of things, possessions. That it was okay to be who you were, and that gave me a lot of confidence.

SCV: How do you feel about the perception of women in today’s society?

Amanda: On a certain level it’s all about a ‘platinum’ male fantasy but at the same time one has to remember in today’s society a woman is more freer than ever to be who she feels she needs to be. And this is where feminists agree with me. A woman can use their effeminate power to get ahead, to strike a deal.

SCV: What are the most memorable struggles on the road to becoming Amanda Lepore?

SCV: How has fame changed you?

Amanda: It hasn’t. I just have better shoes, and lots of them. My closets are stuffed with them.

SCV: Apart from being a cover model, a singer, model, you are also a hostess, that said what makes a good hostess?

Amanda: Being friendly, attentive, remembering people, being proud to be there and anyway I just love dressing up for my events.

SCV: How long does it take to dress up before a show?

Amanda: Oh my god, at least 3 hours. You can’t imagine how much is involved, and I have so many wigs to choose from…and then there’s all the accessories and dresses to match.

SCV: If one were to follow in your path how would you advice them?

Amanda: Just do it. Don’t let yourself get in the way, we’re often our own stumbling blocks.

SCV: Is that coming from personal experience?

SCV: What’s your take on celebrity, the over abundance of it, and how do you feel about being one yourself?

SCV: How does that affect the arts?

Amanda: Well I think in a way it makes it easier to try and become what you’d like, and it brings more mediums to the table, lots of it actually in a nano second. You have more pop stars, soaps, celebrity figures and the like on the internet, but you have to wonder how real that is, how self manufactured that is, and whether that has longevity. Really, if Marilyn Monroe had to be around today, she’d probably be a desperate housewife instead of a movie icon.

SCV: Is that because being a pop star or a desperate housewife is bigger today? 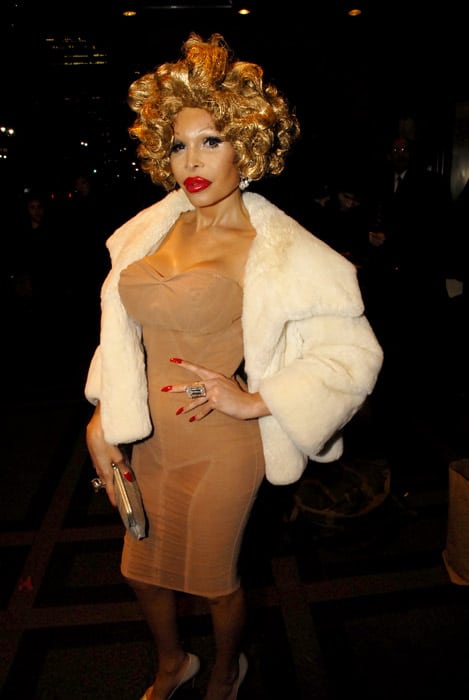 Amanda: In a perverse way it is. It’s what we’re consuming.

SCV: Talking of which, what do you think of Paris Hilton?

Amanda: I think it’s cool she loves herself as much as she does. I do admire her ability to work the room, get herself in front of the press, and make a wonderful scene. I guess it’s better than being some rich kid feeling sorry for oneself.

Amanda: Well you have to wonder about anyone who’s really never had to suffer fort their art, in her case she bought herself in. Take Amy Winehouse for instance. She’s super talented, but very real, she’s earned every note that she sings about, and you feel that when you listen to her, so it’s just not a slick production.

SCV: Talking of pain and slick, what do you think of Britney Spears.

Amanda: I think it’s amazing that she’s been able to come back. I think she really suffered, but she held on, used the electronic media, as much as they used her and her fans stayed through with her. In the end she became a real person, and people really appreciate that and respect that.

SCV: Talking about fans, who are your fans?

Amanda: The club kids love me. The gay community and also a lot of young girls, call it the Barbie effect. I mean I get to fly the whole world, Latvia, Russia, France, they love me.

Amanda: I think it’s because I’m this role model for so many people. I give them courage to be who they want to be, but in a fun camp way.

SCV: And they give you courage to be who you need to be?

Amanda: Yes.  In some ways, a performer and his or her fan exist for the sole exclusivity of each other.

SCV: What can we expect of you going forward in the future.

Amanda: I don’t know, I’m just being me, singing, hosting, doing cabaret, bit parts in films and being free.

Amanda: Of course, once a girl, always a girl…