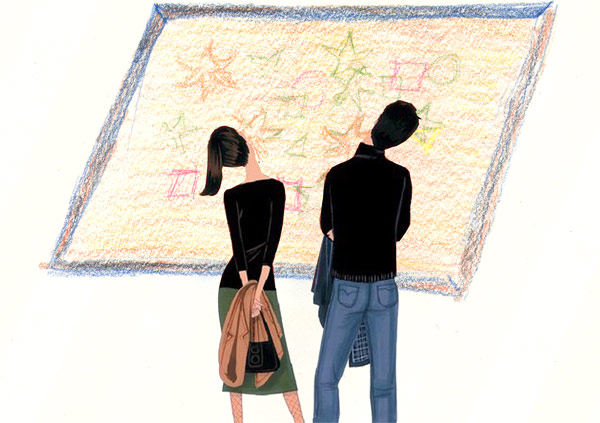 “This is how you are supposed to stand,” Umberto whispered in my ear as I took a sip of my PBR and stared at the painted and carved wooden slab on the wall. He slid apart his stance another two inches and lifted his hand to his chin. I expected him to stroke it like he had a goatee, but he just stiffened his fingers and held them there, slightly pouting his lips.

“Ah. And what is it you think about?”

“Nothing. Actually, you think about thinking. And after you’ve come to your conclusion that it is good to stand and look and think about thinking, you move on to the next piece. Maybe you start to move on and then, as if caught by some revelation, you look again, lean in closer this time, and smile.”

“Is this a signal to other people that you’ve truly “seen” what it is you’re looking at?” I asked, laughing.

“Yes. Letting other people know you know is what public art viewing is all about,” he said.

I turned back to look. One wall, one painting. No card explaining what the artist was trying to achieve, no title, no price tag. The artist, Zach Schwartz,( not that I can remember his real name anymore…) carved and painted plywood. Imagine a child rolling a big ball of play dough out flat and cutting the edges to make a square or rectangle. Then using cookie cutters in various geometric shapes- stars, triangles, hexagons- to cut into the edges of the dough. The wooden canvases looked sort of like that, or a paper snowflake gone wrong, the child forgetting to or a little afraid of cutting holes in the middle.

The face of the wood was etched and grooved and then acrylic paint was applied in more geometric patterns. They were interesting pieces of work in their detail. Perhaps I was supposed to take something profound away from Zach’s use of wood as a canvas, not just a frame. The outer is the inner? Break the border by using more of it! I’m not exactly sure. These were the thoughts going through my head as I stood there looking.

And then I thought, damn, this is my first gallery viewing in New York. I felt underdressed and undone up. I would’ve liked to have some eyeliner on, maybe a fancy scarf. I left the painting and traded my empty beer can for a glass of cold, white wine. Suddenly, perhaps because of all of the happy chatter in the gallery from people sharing their inner artistic selves, I wanted to tell the woman pouring that I had men’s underwear on and the back of my hair was matted like an old dog left out in the weather too long from being rubbed up against someone else’s sheets. Instead I thanked her and kept my secret.

I found the corner of the gallery where people were taking it easy, tilted back on my heels and leaned like one more painting in the exhibit. Above my head floated a silver sculpture like a giant mushroom made of mercury. Taking off my hat, I looked up at it hoping to see my reflection and get a read on my looks. Nothing, just a human colored smudge.

Sitting on the couch a younger woman with red lips was explaining to an older man how she felt artists these days were becoming too much like hippies.

“They think that just because you make something and it makes you feel good, you’re an artist. And then you can’t criticize them for it because they don’t care about what it looks like because they’re so goddamn happy about doing it. They’re not taking the risk of trying something complicated to get something great. They’re just creating. I don’t consider that to be art and I don’t consider them to be artists.”

“Yes. We must hold ourselves to a higher standard. I agree,” he responded, and bit down into his brown-goo-covered vegetable dumpling from the buffet.

“He must be hungry,” Umberto said, sliding up next to me. “That’s like his third plate and he’s filled it up every time.”

“Good for him. He needs the nourishment to get through the rest of the conversation he’s having,” I replied. “I wish I could explain to you why what she’s saying is pissing me off. But then I would be one more person talking about people doing stuff instead of doing it.”
“Well, then, finish you’re wine and let’s blow this joint. You feel like going dancing?”
“I always feel like going dancing. I’m a goddamn hippy, after all.”