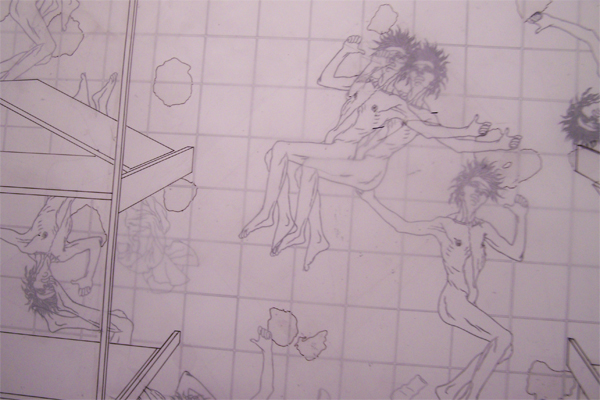 We’re not even a block away from Heist gallery and we can already see the Louis Vuitton handbags flapping in the wind and the idle cigarettes careening all the way down from 27 Essex Street. Approaching the box size Heist gallery we’re astonished to find a bopping crowd, bopping not so much to a Britney Spears tune, but more to their own energy, charisma and let’s face it chutzpa.

Surrounded by wall to wall print illustrations and the shadows of those with striking silhouettes and stamina I make a run to the wine bar where I come in touch with the debonair set of Molly and Julie from Heist Gallery.

From there I’m led to a quick preamble as to Heist’s origins- the offspring of Sarah Basile and Talia Eisenberg as of May, this group of troopers aren’t interested where you live, who you already show with, and how many millions and minions you’ve made but rather the possibility that you can be groomed to be made .

Molly: I think we are one of the few galleries, especially given the current economic situation to receive new artists.

Molly: We’ll we haven’t a clue what we’re doing but in so many ways we really do. We’re so inspired, we work so hard, bringing the talent along, giving it the room to grow, to flow. To be honest we’re kind of flying by the seat of our pants, but I don’t think we’d have it any other way.

I take a cool look around the room and finally no longer resist asking what I’ve found.

SCV: So you train and guide the artists, but prey how do you train the crowds?

Molly: Oh them, (as if suddenly noticing…) well they come with the territory, they’re friends of Sarah’s and Talia’s and then there’s all the artist’s friends….all thirty of them. And anyway we have socialites upon socialites dropping by.

SCV: Yes I can see that. Talking of which can you define vanity for me?

SCV: We should hope so, but could you be so kind to elucidate?

Julie: Well it’s what someone who only wishes what the other guy has who gets called vain.

SCV: Would you say on the whole we’re a vain society?

Molly: Well, sure, it kind of makes sense, if society is made up of a bunch of vain people it only goes to say that society is vain too.

SCV: Is it safe to say we assume vanity over jealousy?

Julie: Well it does make for better art and parties.

Turning to the erudite Joshua,

Joshua: I thought you were cheeky when you walked in.

Joshua: Well if you must know I have a taste for art.

SCV: And all this glamour is just a coincidence?

Joshua: Well, it’s true we can barely all fit in and where suppose to be having a recession.

SCV: So recessions are good for the glamour set?

Joshua: Well maybe it’s then you really want what you can no longer have.

SCV: Or maybe just give up on what you used to have?

SCV: Yes, I’ll take the one in your hands thanks.

Coming up against Kory,(who works at Heist) Elizabeth and Justine.

Kory: We like to keep the work well priced. We are in a recession after all.

SCV: Yes, I was told. Is that a drink in your hand?

Drinks aside, we here at Scallywag and Vagabond we’re delighted with this young gallery’s bravado and élan and there were indeed some note worthy curiosities hanging up on the wall, a regiment of young talent coming very well along under the auspices of Sarah and Talia, and let us not forget the glamorous set.

That and the revolving flash bulbs and the never ending grog, never ending until we finally made haste back down the down trodden Essex street, the old world veneer of a wide eyed New Yorker fighting against the odds and before the Gods…