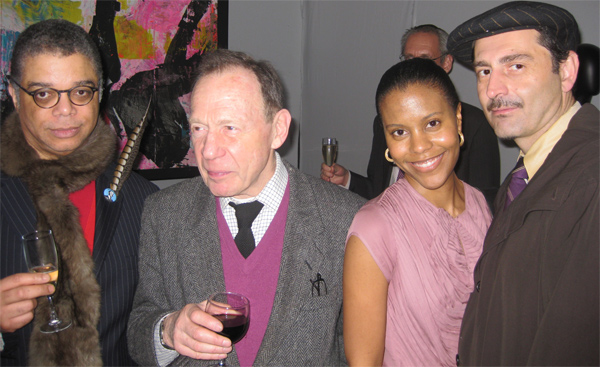 We’ve really started to become quite aghast at the latest social shenanigans and goings on about town late, call it the economy, the aperitifs, the tremendous social ego, the loss in your stock portfolio or the guy at the door who you’re haranguing just to get in- it’s all beginning to mimic the last days of Ancient Rome. That said, we couldn’t help ourselves and turn up one more time and begin to speculate on the social impulse of becoming a socialite, actual or aspiring.

We’re standing in a large room sandwiched between a donkey with a tray of champagne, a witty Englishman making passes at one of our reporters, and the remnants of designer poses and pedigree that we’ve come to notice and approximate in big glossy journals like Vanity Fair. All in all it’s just business at usual, but we can’t help but notice the stiff upper lip and slouching shoulders of the crowd in front of us reminds of the dark times of our youth when we were forced to pay homage to relic aunts and uncles. Except these aunts and uncles are the ones you’ve been reading about over and over and as much as you’d like them to go away or give you more standing room they want to make sure you commiserate with them the terribly difficult and demanding job it is to be an outstanding socialite.

Like most socialites or aspiring socialites we’re not sure why we’re here, except we heard there’d be a few super models, and famous actors fighting for some cause and dare I assume a photo opportunity. Further investigations reveal according to our publicist- Sabrina Chapman that we’re suppose to be here for a “Fashion for Food” cause. It’s obvious that she’s lying because why we’re really here like everyone else is to fornicate over each other, drink prodigiously, and make covert passes. That and tend to the social pulse of a city that never feels like itself the next morning unless there’s a ‘bizarre love triangle’ to read about or a slap or a glare that was thrown. We’re kind of hoping that Naomi Campbell will fly in and misbehave and fling a tray at someone, and although the idea occurs to me that perhaps we should attempt to bribe someone the act of unsolicited vengeance leaves a less than thrilling pall in our nerves. But you do have to understand part of being a respectable socialite or aspiring one is that you were there the day the shit hit the fan. And so far the shit hasn’t hit the fan, well except for the donkey walking around serving us umpteenth rounds of champagne…

This only leaves us one option, that’s right, we’ll do what most self respecting journalist/aspiring socialite or actual socialite would do- we’ll dig up the dirt on some unsuspecting soul and try to embarrass them as humanely as possible while having them think we adore them, which we actually do…most of the time.

Our first impresario Candy Stripe, (obviously her socialite stage name…) proved to be quite nimble.

SCV: What makes a socialite?

SCV: Are you being coy with us?

SCV: Where do socialites hang out?

SCV: With lots of photographers and other socialites?

CS: I hear there more fun.

SCV: For some of us…

SCV: How does one get invited to socialite parties?

CS: By being a socialite.

SCV: Is that a hard thing in life to accomplish?

SCV: Should there be a deportment school for aspiring socialites?

CS: Are you kidding me?

SCV: But then how does one refine the act of being a socialite?

CS: By being well heeled.

SCV: Which you are?

SCV: What are some of the finer points of being an upstanding socialite?

SCV: Yes, that can be a bit distasteful, except when you’re the one doing it. Should one take incoming calls at a social gathering?

CS: Never. But a text is permissible.

SCV: So who is that you’re texting right now?

Still completely not totally satisfied I went after my next impresario, the utterly divine and may we dare say the impeccably behaved DR.Erika Faust.

EF: I know, I’m still trying to get used to it myself.

SCV: How did you manage to find yourself at this event tonight?

EF: I was invited.

SCV: Are you glad you came then?

SCV: Do you often come to events like this?

EF: Yes and no. It depends.

SCV: Can you please elucidate?

EF: There’s two parts to me. The one part that is very grounded, committed and the other that is…

SCV: Reckless and uncommitted, and hence your presence here?

SCV: What type of socialites exist?

EF: Once again there are two types, the ones who are here by default, ie marriage, birth, inheritance and the other, the self created ones.

SCV: So which group are you in then?

SCV: So that would make it three groups then?

EF: Are you playing with me?

SCV: Not in the slightest. Talking of self made, how does one approximate self made? Through a hedge fund, plastic surgery, a reality show?

EF: Reality show? I don’t think so! That would be the last thing that you would do.

SCV: Except when you do.

EF: Well it’s done, the novelty has worn off. I don’t think anyone cares.

EF: I hear they’re supposed to be royalty.

SCV: Well we would appreciate it next time if a supermodel or two turned up and had a bitch fight.

We then came across the dandy, author, historian –Michael Henry Adams.

SCV: Good to see you again Michael? Are you behaving yourself?

MAH: I was wondering that about you actually…

SCV: Indeed. Tell us Michael, what makes a socialite?

SCV: Even if you lack self virtue?

MAH: That seems to help. No I don’t think it matters what short comings one may have, as long as people are attracted to you.

SCV: So I still have hope?

MAH: We shall see.

Joining Michael, was the literary bad boy and the prodigious keeper of all that is social, Anthony Hayden Guest.
AHG: We seem to keep bumping into each other.

SCV: It’s all the canapés they keep offering. Tell us Anthony, how does one become a socialite?

(thinking pensively to himself for a moment)

And the threat of having to deal with themselves.

SCV: I thought that was plastic surgery for such things, and aspirins too.

AHG: There is, but I’m reminded of the adage- “Heaven is other people.”

SCV: So would you agree then that you’re a socialite?

AHG: Well just a socialite lite if I May say.

AHG: You think so?

The donkey kept coming and so we continued our drinking, our idle attempts to be grand and from time to time we we’re probably reminded what had brought us all here, raising of money, but to be honest such things are passing thoughts to an aspiring or actual socialite. Nevertheless there will always parties to attend to, agendas to be met and wonderful human experiences to be had.

Now if I could only find that donkey one more time…