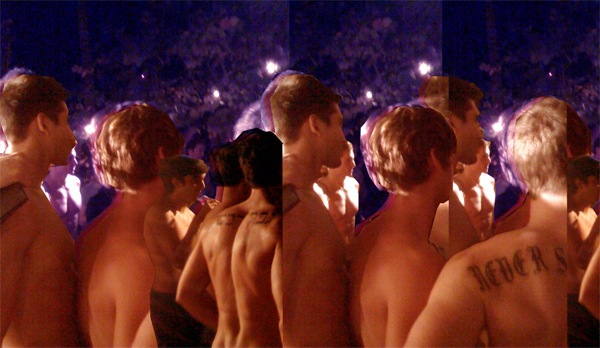 Making our way back to South Beach for another vestige of pretty people had us stopping in at the Raleigh Hotel last night in honor of art/fashion magazine Visionaire’s party. Getting in required lots of talent, wit, and if that failed an invitation into the Fort Knox invitation only for the anxious jet set waiting to be heralded into superstardom, free booze and the requisite ogling that comes along with being socially vanquished and desired.

Making it past the double barricaded velvet ropes Scallywag and entourage quickly passed by and were indeed delighted by the spectacle of transgender, Doyenne Bonny behind the turntables and the scantily clad boys who for the rest of the evening I kept calling either Chip, Claude or Clark, after all, by the twentieth ingénue we were all losing count and quickly succumbing to disco beats, sand between our feet and the adulation that comes with being good enough to get in. Whatever that means right?

Charmed we set about ingratiating ourselves with the celestial set, comparing Biff, Buff, and Chuck’s abdomens to our very own and momentarily wondering how long male beauty has come since the dawn of kouros of Hellenic art traditions, to Michaelangelo’s David, and our ever present revolving reality shows, modeling conquests and doe eyed beef boys.

Swiss patrons, German editors and talk show hosts that interviewed us, please it was the alcohol that made them do it we decided it was now time to see if heart throb, so Benedicte, my photographer kept telling me

Benicio del Toro was as rebellious as the film he and Steven Soderbergh had come to promote their most recent venture, “Che.”

Grabbing handfuls of the delicious canapés making their way round to the cigar swilling crowd on the other side of the Raleigh Hotel, more velvet ropes to pass and trespass, we finally came across the desired affection of our dear Bennedict.

Bennedicte: What should I ask him?

Scallywag: If he believes in manners.

Benedicte; Of course he does, he’s a sex object!

Scallywag; Are you sure I shouldn’t go instead dear?

Benedicte: Please, I want to talk to this man, my God, look at him!

And like every other woman befalling this ‘star’ my French photographer proceeded to stammer, throw up, giggle, stutter, and convulse before I gently stabbed her in the back.

Benedicte: Yes, but a very beautiful one!

Of course our dearest could only proceed to smile, stutter, shake hands, make out with him (in her mind), and politely excuse herself.

Benedicte; I couldn’t do it… yet I wanted to!

And then I started laughing, I had this wonderful epiphany in the middle of this media circus called life,

“that the artists, the actors that we vest with rebellious sensibilities (after all Che Guevera was, and I still believe, is a rebel) were a mere reflection of our desired sensibilities. If anyone was the rebel it was the salacious public, the tall blondes, the Claudes, the ingénue Clarkes circling the promenade. They were the desired effect, the required audience of a certain Scallywag and film director and a public that dares and sometimes rebels…”

Taking Benedicte into my arms, I assured her it was all wonderful and that Benicio was admittedly the doyen of his genre, but really the reflection of our collective sensibilities.

Shaking her head in disbelief, I left Benedicte, as I set happily home to meet the hangover, and my own desire to transcend.