Was Scarlett Fakhar a former KRIV news anchor wrongly dismissed? Debate erupts as to whether a state of political correctness led to a journalist fired.

In a Facebook post which had been set on private before being made public and shortly thereafter brought to her employer’s attention, Fakhar expressed relief that Donald Trump had won, blamed Barack Obama for racism along with questioning the degree of white on black violence vs black on black violence.

Reacting to being dismissed from her post, the journalist said she was fired for expressing ‘conservative views.’

The 25 year old reporter’s firing comes after she was accused of bias after posting that she ‘could barely sleep from how happy and relieved’ she was over Trump’s victory, and blaming Obama for making the country ‘more violent and racist.’

Posted Scarlett Fakhar in part: ‘Look what Obama has done … how he was made the entire country hate one another. Were you happy with how many people were killing each other in our own country? I work in news … and I hate to say it … but the number of African Americans killing one another far outweighs the number of them being killed by whites.’

Hardly non sensitive topics ensured to not engage a reaction one way or the other. Something one wonders was Fakhar’s intent in the first place. 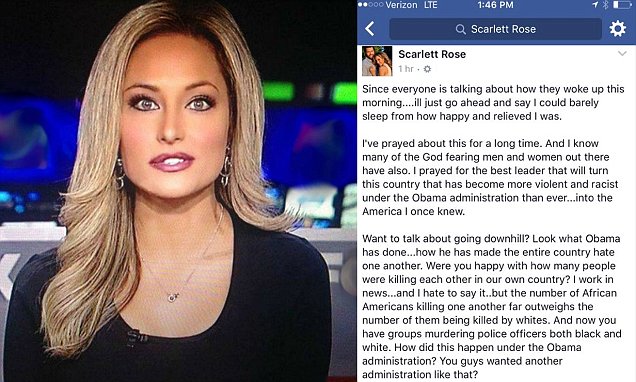 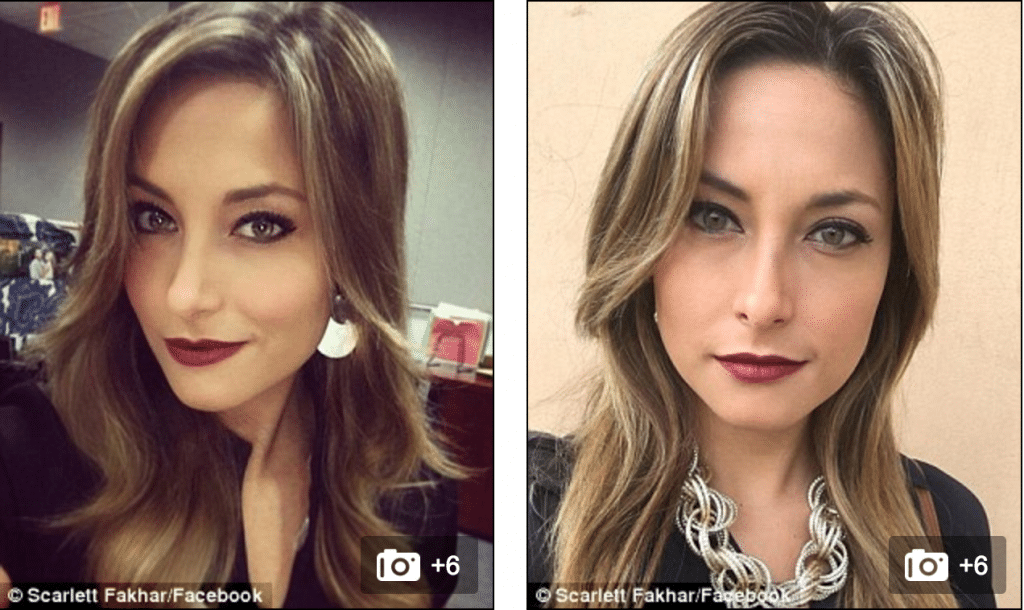 But it gets better. Fakhar also criticized college students, calling them lazy and entitled for wanting free education, while also adding she opposes higher taxes on the rich and claiming that immigrants must ‘do it the right way’ like her Iranian father.

Soon after the journalist apologized after her views went public, saying on Facebook that she had breached her responsibility to be objective.

‘I need to profusely apologize for making public my personal views on the outcome of the election and other issues. It was wholly inappropriate, as a journalist, to do that. Again, my sincere apologies,’ she said.

The post, and her original post-election diatribe, have both been deleted.

Nevertheless, Fakhar was less apologetic in parting ways with her former employer whom she had worked for since September 2015.

Wrote the tempestuous journalist on Thursday: ‘FOX 26 Houston is trying to take my fan page down now! DON’T LET THEM! #FREEPRESS #FREESPEECH#FIRSTAMENDMENT.’

Fakhar also criticized reports focusing on her discussion of black-on-black crime, saying that she is multiracial and not a racist.

The journalist’s last story for KRIV was a piece about an 11-year-old boy beaten after voting for Trump in a mock election.

What do you think? Does Fakhar only have herself to blame for getting the sack? Shouldn’t she have exercised more prudence knowing full well (or at least ought to) that her statements had the possibility of compromising her employer and the perception of bias reporting and possibly invite retaliation? Yes political correctness has opressed us all you may wonder.

Or should Fakhar go out and seek legal counsel and demand a payout for being fired for doing nothing more than expressing her personal views while of course at the same time quite possibly tainting the perceived non bias (which doesn’t exist in the first place) in media of her employer.

And then there were some of these comments on the web that caught my eye, see what you think?

Houston has become a cesspool of fac sist liberal thought. She’ll land a job in a better market that is more open minded. Just look at the election map; 99% of America agrees with her views.

Feel sorry for her. If you have right wing views, just keep them to yourself for now, until this PC madness ends!

Freedom of speech only applies to certain people.

When did free speech die in america? This was her own facebook message. Another news network that needs cutting off.

Unfortunately to be a liberal today, it appears as if you must have two fundamental characteristics (1) Be a hypocrite and (2) Be intolerant. I will no longer purchase the Houston Chronicle and only watch football on Fox 26. It speaks volumes about the state of character in our country, when you are fired for a personal post not even representing your employer,

I support you for standing up to the bias reporting. Saying what you believe in. Wishful thinking – I hope the stations advertisers, ( probably bias also) use another channel to advertise on.