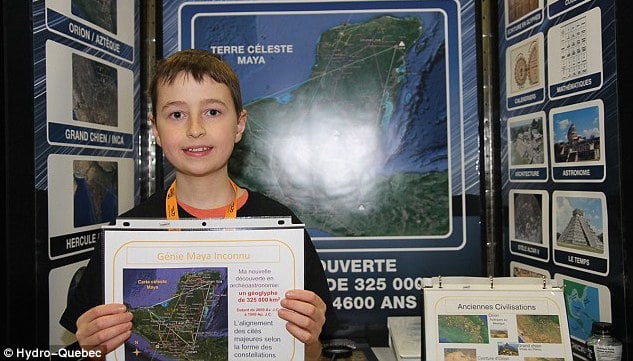 How William Gadoury a 15 year old Canadian teen was able to create his own theory in explaining where a third city ought to be after looking at the night sky.

William Gadoury a 15 year old Canadian teen has uncovered the remains of a lost Mayan city from his bedroom, thanks to his curiosity of the night sky and the surrounding star constellation.

The discovery of the missing city, since named K’aak Chi or Fire Mouth (courtesy of Gadoury) comes as researchers believe it may account for one of the largest Mayan settlements ever created.

Analyzing the 23 known constellations known to the Mayans against the cities known to be in existence, the youth was able to pair all known city clusters against corresponding star constellations. Except for one.

The theory links the constellations to 117 Mayan cities spread around Central and South America.

Told William Gadoury via the Montreal Journal: ‘I was really surprised and excited when I realized that the most brilliant stars of the constellations matched the largest Maya cities.’

Bizarrely the realization came despite the hundreds of years researchers have spent analyzing Mayan culture.

It wasn’t until Gadoury observed the 23rd constellation that he found that there was a star that did not match up with a corresponding city. According to the three star cluster, there ought, Gadoury reasoned also ought to have been a third city, despite only two known cities matching.

This in turn led to the teen wondering if such a city were to exist where it would lie? A hunch the teen was able to come to confirm with the aid of google maps.

Using google maps, William Gadoury was able to pinpoint where the settlement should be, in the Yucatan Peninsula in Mexico.

From the teen compared images supplied by the Canada Space Agency to where google maps told him the missing city ought to be. The cross checking all the more easier thanks to the agencies use of satellite telescopes which made for amazingly detailed photographs of the earmarked peninsula.

In turn, the pictures, to Gadoury’s and researcher’s delight, revealed a square shape, which scientists believe to be a Mayan pyramid, circa 86 meters high pyramid with an accompanying 30 buildings.

Told the teen via The Independent who now wishes to see the uncovered city with his own eyes:

‘It would be the culmination of my three years of work and the dream of my life.

‘There are linear features that would suggest there is something underneath that big canopy.

‘There are enough items to suggest it could be a man-made structure.’

Offered Dr. Armand La Rocque from the University of New Brunswick: ‘A square is not natural, it is mostly artificial and can hardly be attributed to natural phenomena.

‘If we add these together, we have a lot of indication there might be a Mayan city in the area.’

But that may be easier said than done as the academic acknowledged it may be difficult to get archaeologists to investigate.

Reiterated Daniel de Lisle of the Canadian Space Agency: ‘What is fascinating about the project of William, is the depth of his research.

‘Linking the position of stars and the location of a lost city and the use of satellite images on a tiny territory to identify the remains buried under dense vegetation, is quite exceptional.’

The Mayan civilization originated in the Yucatan and rose to greatness in the 3rd century AD.

Their empire spread from Mexico into Guatemala, Honduras and El Salvador.