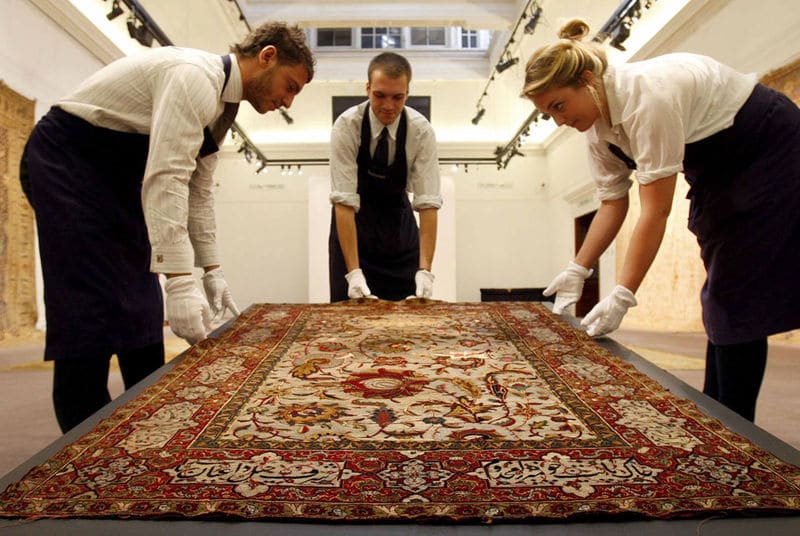 An Upper East side couple have told of being ripped off after purportedly paying ABC Rug Cleaning the bounty fee of $42 000 to have their Persian carpet cleaned. Or to be precise the wife agreed to pay the vast sum to the woman’s exasperated doctor husband’s horror.

The true tale comes courtesy of the nytimes in a column where disgruntled consumers voice their astonishment and sheepishness of having allowed themselves to be taken for a ride.

Same basic facts before we proceed with our tale of woe.

In order for ABC Rug Cleaning company to come and take away the tattered carpet for much needed repairs, the outlet purportedly asked for a $5000 downpayment. Which then escalated to $20 000 before the wife conceded to her deflated physician husband that in the end she had $30 000 charged on her husband’s American Express card.

Here’s another interesting fact you should bear in mind in our tale of woe. According to an ‘expert’ the husband reached out to, the doctor was quoted the tidy sum of only $1000, maybe $1500 tops.

But it gets even more sadder.

Reports the nytimes: The doctor had questions of his own, which he posed in a call to ABC Carpet & Home, a well-known retailer in the New York area. A representative there had grim news: The company has no connection to ABC Rug Cleaning.

From there we find out along with the doctor, that the names of the two businesses, high profile outlet, ABC Carpet and Home and ABC Rug Cleaning with whom the doctor (and presumably many others) assumed were closely synchronized had nothing to do with each other, with ABC Carpet and Home telling that they have lodged a federal registered trademark suit against ABC Rug Cleaning for falsely implying ‘the existence of an affiliation of source or sponsorship.’

But it gets even better. As it turns out, ABC Rug Cleaning don’t even have a physical address.

That’s besides ABC Rug Cleaning claiming to have locations all over  ’NYC and Long Island.’

But at least they have a fancy web address which explains: Our company offers you the best solution – professional carpet and rug cleaning (NYC). This service will return your floor covering cleanness and brightness of colors.

Some digging up reveals a purported connection between Eric Shab (a principal at ABC Rug Cleaning) and Benjamin Hatooka, with the latter having a history of nebulous business dealings in the past, portending to be affiliated with ABC Carpet and Home.

In the end the doctor husband decided to cancel the whole deal all together, which naturally led to a very tense showdown between the physician husband and the parties of Eric Shab and Benjamin Hatooka.

The good news is that the Upper East Side couple did get their Persian carpet back. But only after agreeing to forfeit $20 000. The bad news is that nothing was tended to the ‘damaged carpet,’ according to the couple.

Last reports indicate marital woes escalating between the Upper East Side wife and her physician husband. Can you guess why?

Which raises the awkward question, how has the couple’s carpet been received back in the house, are the colors more muted, does the room feel more stifled. Or will the couple just throw the damn thing out and look for a new carpet? Surely one can find a decent and not too shabby Persian carpet, give or take a spare $20- $30 000 lying around in the kitty…?