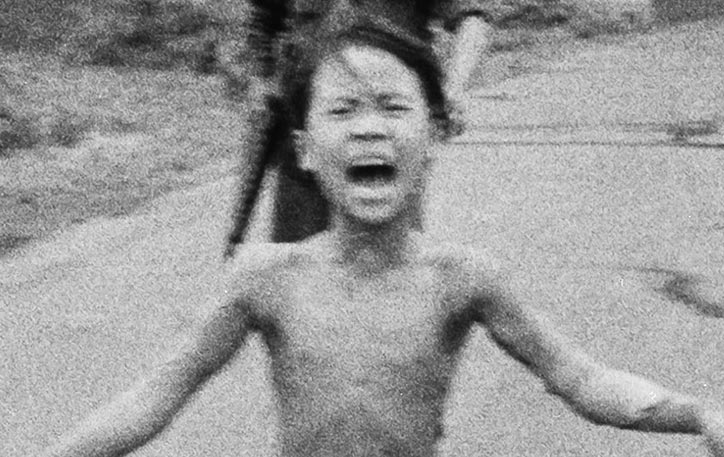 Her naked crying soul has become an iconic image to the ravages of the Vietnam war, a war that came and went for most of us, but lived on horribly for one then 9 year old girl, Kim Phuc, whose fleeing image has become a world eyesore after a 1972 photo of her went world viral.

As she and countless other children runs towards an unseen photographer, fleeing the effects of chemical warfare, with American GI’s in the background down a desolate street, unknown to Kim Phuc and other children like her, she would spend the rest of her life dealing with chemical burns sustained that day.

Although the burns aren’t visible in the harrowing image, the ravages of an errant napalm strike in 1972 in the village of Trang Bang, outside Saigon, would over the years take their toll on the then 9 year old girl, scarring her body and leaving her in chronic pain.

But relief has finally come, some 43 years later as Miami based burns dermatologist specialist, Dr Jill Waibel agrees to take on Phuc on as a patient.

Told the now 52 year old Kim Phuc who last month began her first of a series of treatments at the Miami Dermatology and Laser Institute: ‘So many years I thought that I have no more scars, no more pain when I’m in heaven. But now – heaven on earth for me!’

If things go right, Dr Waibel is hoping that ongoing laser treatments may smooth and pale Kim’s blotched skin, which includes scarred tissue that ripples from her left hand up her arm, up her neck to her hairline and down to almost all of her back.

Unimaginably the napalm strike at the hands of South Vietnam forces left Phuc with serious burns to over a third of her body. At the time, burns to even just 10% of one’s body was an almost death sentence.

But most importantly for Kim Phuc, the treatments stand a good chance of at last relieving the deep aches and pains that the then 9 year old came to suffer, that still plague her to this day.

Told Phuc: ‘As a child, I loved to climb on the tree, like a monkey,’ picking the best guavas, tossing them down to her friends,’

‘After I got burned, I never climbed on the tree anymore and I never played the game like before with my friends. It’s really difficult. I was really, really disabled.’

There to support Phuc in a bid to at last put an end to the chronic pain and begin to remedy her omnipresent scars is her husband, Bui Huy Toan with whom she now lives with in Canada, and the photographer who came to take the iconic picture of her, and win a Pulitzer prize is Los Angeles-based Associated Press photojournalist Nick Ut, 65.

Told Phuc of the man these days she calls ‘Uncle Ut’: ‘He’s the beginning and the end,’

‘He took my picture and now he’ll be here with me with this new journey, new chapter.’

Compared to the other surgeries and skin grafts when she was younger, Phuc tells the lasers are easier to take.

Reiterated the woman: ‘This was so light, just so easy.’

A couple weeks later, home in Canada, Phuc says her scars have reddened and feel tight and itchy as they heal – but she’s eager to continue the treatments.

‘Maybe it takes a year,’ she says. ‘But I am really excited – and thankful.’

Unsaid though is why it took Kim Phuc so long to receive the treatments she so desperately needed and why it wasn’t afforded to her, but most importantly who bears the real culpability of Phuc’s distress and others like her?