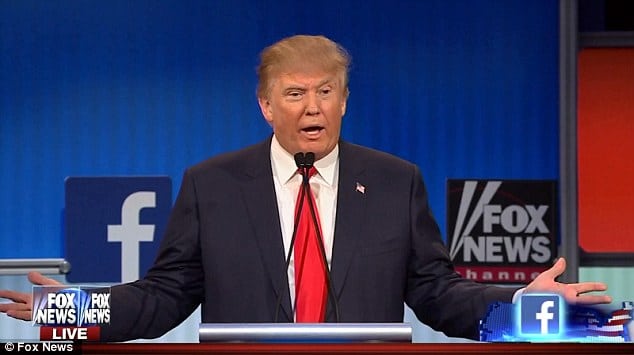 Whether by design, buffoonry, general apathy or a lack of sensitivity or just sheer callousness/animosity towards women, Trump wasted little time falling into Kelly’s trap.

Asked Fox’s Kelly (who one wonders wasn’t on Rupert’s orders to take down the mercurial front runner): ‘Mr Trump – one of the things people love about you is you speak your mind and you don’t use a politician’s filter,’

‘However, that is not without its downsides. In particular, when it comes to women. You call women you don’t like, “fat pigs,” “dogs,” “slobs” and “disgusting animals.” ‘

At this moment viewers could only wonder did Trump imagine himself to still be on some game show where he was calling the shots and browbeating contestants (this time female moderators) or whether the man had simply lost his marbles?

But Kelly, imperiled with a mission set on once the audience settled down from the game show contestant’s response.

Continued Kelly: ‘No, it wasn’t’

‘For the record, it was well beyond Rosie O’Donnell.’

‘Your Twitter account has several disparaging comments about women’s looks. You once told a contestant on Celebrity Apprentice it would be a pretty picture to see her on her knees,’

‘Does that sound to you like the temperament of a man we should elect as president?’

Not content to leave at that or even eke out a half hearted acknowledgement of past transgressions or to just simply put a zip in it, the game show host decided  he needed to put the female moderator in her place: ‘I’ve been very nice to you, although I could maybe not be based on the way you’ve treated me.’

The wisest response one wonders? Was it a slighted veil of a threat? Or just the cavalier businessman stepping into his own inability to sometimes keep his mouth shut and not tempt disconcert amongst female voters who happen to make half of the electorate? Or was this the response of a hypocrite who expects the world to behave nicely (when he is not behaving like a boor himself), and if not off to battle stations?

And then there were these reactions from twitter below which made me wonder….

Holy smokes. Did Donald Trump seriously threaten Megyn Kelly on national TV? Who is seriously considering voting for this misogynist douche?
— wish i were there (@wiwthere) August 7, 2015

Did Donald Trump just threaten Megyn Kelly? (I’ve been nice to you, but no more.)

#GOPDebate #DonaldTrump asks MegynKelly to get on her knees if she doesn’t praise him.
— Joseph Chez (@JosephChez) August 7, 2015