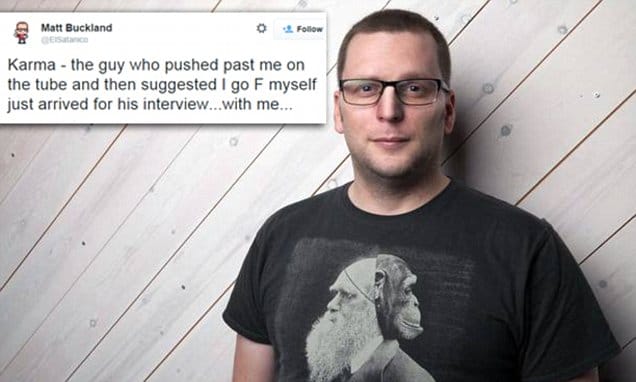 An un-identified London man has had the surprise of a lifetime after running into the same individual, HR Executive, Matt Buckland at investment firm Forward Patners for a job interview who just a few hours ago he told to ‘go fxxx himself’ at London tube station, Monument. Needless to say he didn’t get the job. But better still it didn’t even occur to him until much later during the job interview that Buckland was the man he had cussed out.

In a report via the UK’s Metro, Matt Buckland tells the commuter had pushed past him and proceeded to launch a foul mouth tirade as they both made their way on a packed rush hour train Monday morning.

According to Buckland he had attempted to stand to one side to let a woman off the train as it pulled into Monument Station, central London, nevertheless the job hunter had thought the man standing in front of him, the man he would in a few short hours would be trying to assuage to offer him a job had been deliberately standing in his way.

Offered the Human Resources executive via buzzfeed: ‘I was on my way into work on the Tube on Monday morning during rush hour. I stood to one side to let a lady get by, and ended up blocking a man momentarily.

‘I think he thought I was just standing in his way: ‘He pushed and I turned, I explained I was getting off too but he pushed past and then looked back and suggested I might like to f*** myself…which might have been true but not before a few cups of coffee,’

It wouldn’t be until a few hours later that Matt Buckland was greeted by the visage of the same individual who had earlier cussed him with the hopes of being offered a job by Buckland. A moral hazard indeed.

Incredulously (or perhaps not), the job seeker did not recognize his interviewer upon arriving at that morning’s job interview.

Perhaps noting that the man hadn’t necessarily recognized him (or was the interviewee just playing dumb or simply blowing that morning’s altercation off?), Matt Buckland proceeded to ask the man a few tube related questions, until it finally dawned on the man.

Buckland has since shared the encounter on Twitter with his original tweet favourited 18,000 times and re-tweeted more than 19,000 times.

Tweeted Buckland viz twitter handle @Elsatanico: ‘Karma – the guy who pushed past me on the tube and then suggested I go F myself just arrived for his interview…with me..‘

Adding: ‘I’m not sure he realised until the very end… very awkward!

‘I think it crept up on him slowly as my questions became more and more tube related.’

Buckland would add that the job seeker ‘laughed it off’ upon realizing his faux pax, carrying on with the interview for the role of web developer at the firm.

In the end, Matt Buckland declined to offer the man a job, opining that he was not right for the role. (or any role?).

Reiterated the human resources executive: ‘It would be easy to hold something like this over someone in an interview, but for me interviews aren’t about that,’

‘By the end of the interview we laughed it off and we’re both happy.’

‘When you interview you are looking for a read of skills but also to know if that person is a real human being, it’s about that connection.By the end of the interview we laughed it off and were both happy.

‘The candidate didn’t get the job, though, and maybe now he’ll maintain a better attitude in the morning since he just might need some help from a fellow commuter one day.’

What do you think did Matt Buckland hold that morning’s altercation against the job seeker, or was he simply just wrong for the role? Or perhaps any role…until perhaps some deeper introspection?

Exactly. His behavior outside the interview is not irrelevant to his employment. Who he is off the job is the same person he is on the job.