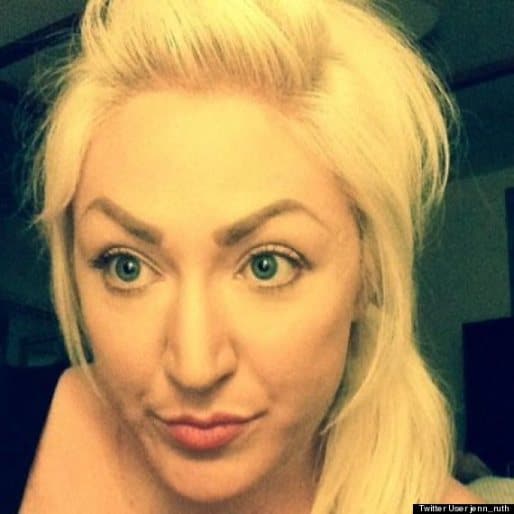 In a remarkable feat of social media, a blonde tattooed country girl from Texas, Jennifer Williams has become the unlikely pin up girl of ISIS after the once proud Christian proudly tweeted about her conversion to Islam.

The tweet notes the UK’s dailymail has since led to the Williams receiving an unlikely gallant of marriage proposals after the foreign policy researcher pointed out the difference between mainstream Islam and the jihadists bringing war and devastation to the Middle East.

Rather than attracting the dissent of ISIS the posting instead led to extremists appreciating her message after it was noted that she had also converted to Islam.

William’s initial message which captured the attention – and hearts – of so many was first posted to just 60 people.

But within a day it had been reposted more than 11,000 times, gaining her thousands of new followers in the process, many of whose profile pictures showed them posing in front of the black flag of ISIS.

The jihadists – many of whom post pictures of the group’s atrocities and try to tempt others to join their fight – then started reaching out to the terrorism research assistant for the Brookings Institute, and even proposing.

One of her new-found followers poses with a sword in his profile picture, and has tweeted pictures showing ISIS beheading victims, as well as images of Osama bin Laden.

And, despite the obvious enthusiasm for Miss Williams’s appearance, some of her new fans tried to impose their own interpretations of Islam onto her, saying she would look better with her head veiled.

The message which grabbed their attention was part of the sarcastic #MuslimApologies hashtag, a reaction from mainstream Muslims to those associating them with ISIS and demanding apologies.

In the posts, Muslims apologize for things which either they had nothing to do with – such as the outbreak of the Second World War – or which are not bad, such as scientific or mathematical advances pioneered by Islamic scholars.

From there Williams would revealed her own conversion story – how she had started to read the Qu’ran for her work on terrorism – and ended up converting.

Tweeted the woman: ‘Sorry I read the Quran to learn abt terrorist beliefs but ended up converting to Islam b/c of what it said. #MuslimApologies #sorrynotsorry’

The response – presumably because of her Western appearance – was overwhelming, propelling her into the consciousness of ISIS militants on the front lines.

Writing about her bizarre rise to fame for the New Republic magazine, Williams describs how men from Saudi Arabia as well as ISIS-controlled lands started making approaches.

The new convert has also found her image – which some Muslims blurred to adhere with their modesty rules now being used to tout her as an ISIS supporter, despite her stated contempt for the group.

Responded Williams: ‘I, for one, do not appreciate having my conversion story used to attract more people to a repugnant ideology that spawns suicide bombings and beheadings.’

Nevertheless the new ISIS pin up girl does hope her messages on Twitter might encourage her newly-acquired fanbase to read the Qu’ran further, which she believes might make them reconsider their jihad.

Williams has since tried to discourage her unwanted fans with a new hashtag #NO2ISIS and other anti-terror tweets, but her viral celebrity continues to roll on. Can anyone guess why…?