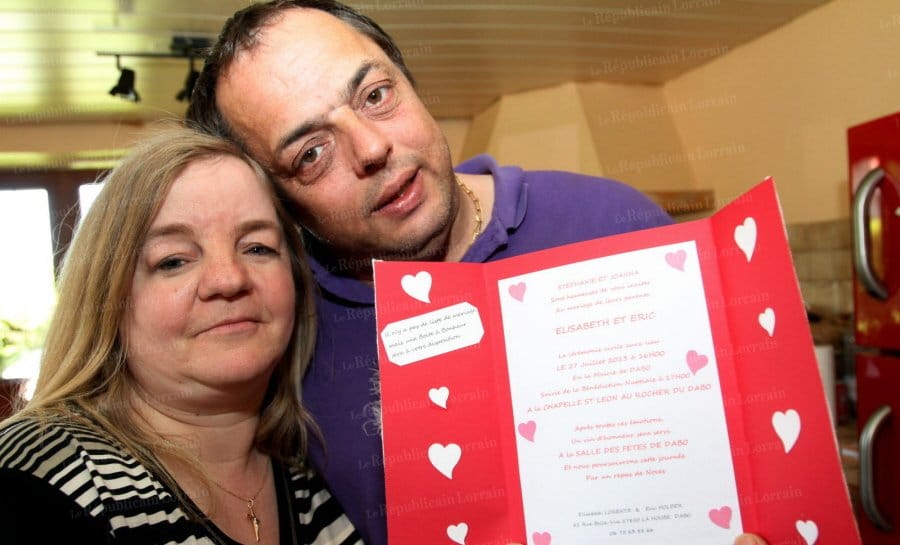 Elizabeth Lorentz, 48 has married her stepson, Eric Holder after months of lobbying French authorities, including French President Francois Hollande for the right to marry the love of her life, her former husband’s son, three years her junior.

The pair would come to marry in the small village of Dabo in Alsace-Lorraine, near Metz, northeastern France, on Saturday with the bride’s former husband and groom’s father also present at the wedding.

The story reports the bbc first began when a then 24 year old Elizabeth Lorentz madly fell in love with Eric Holder’s father in 1989 who by then had a son, Eric from a previous relationship. By 1997 the couple would have a daughter, who is Eric Holder’s half sister as well as his god daughter before Lorentz married her former husband, the groom’s father come 2003.

Nevertheless the pair would separate three years later, with Elizabeth Lorentz telling that her former husband had instigated the break up.

Told Lorentz: ‘I was not expecting it, it was a shock,’

‘I was an adult so I made do. But our daughter who was nine-years-old felt the separation very badly. ‘She cried every day.’

‘That’s when Eric was a great support for us and our relationship evolved.’

Eric Holder, who says he did his best to comfort his half-sister, who is also is goddaughter and now his step-daughter, added: ‘When my father left my mother, I felt abandoned. I knew how she felt.’

With Eric Holder and Elizabeth Lorentz’s friendship soon developing into a love affair, it wasn’t long before he proposed.

Nevertheless the pair who are not blood relatives would run into trouble with French law, which prohibits all unions between stepchildren and step-parents – even former ones.

The couple pleaded their case through the courts right up to the Elysee Palace, only to receive a signed letter from President Francois Hollande last year reconfirming that such marriages are banned.

Told the woman at the time: “I live a nightmare,’

‘When Eric asked me to marry, I was happy, over the moon. Today, I am accused of incest.” “We just want to get married like everyone else, but because of a law to the nuts, which on the other hand allows cousins ​​to marry, you can not. And speaking of marriage for all?’

The couple though would finally obtain the right to marry from a local court in north-east France in June. The prosecutor’s office opposed the decision but did not appeal.

‘At last, it’s the big day! I simply hope that our story will be useful to other couples in our situation, because I know there are some,’ told the bride to be at the time.

She has previously insisted that their relationship has been totally accepted by their family, including their children.

‘Eric’s father, who is also my ex-husband agrees perfectly our history. Our girls too. They have almost the same age and consider themselves sisters. We never differentiate between them. Moreover, they will both be bridesmaids at our wedding,‘ she told Le Républicain Lorrain.

Told Elizabeth of her former husband and the father of the groom as he and up to a 100 others celebrated their wedded union this Saturday: ‘He has always supported us.’