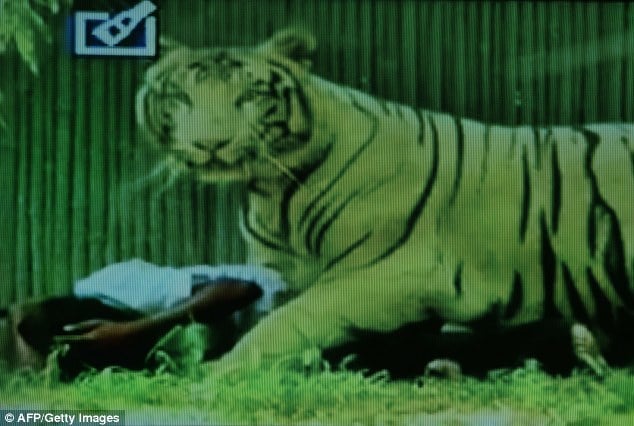 A white tiger has mauled a drunk Indian man to death at New Delhi zoo after the man allegedly jumped into its moat this Tuesday.

Witnesses say the 22-year-old man, named Maqsood entered the enclosure despite several attempts by zoo security to keep him from the tigers.

Once the man had jumped into the enclosure, the tiger grabbed him by the neck as onlookers took to throwing sticks and stones at the animal in an attempt to save him.

Photos posted online of the attack show the tiger standing over the victim, who can be seen curled into a ball, trying to protect his head with his hands.

A witness said he raced to the enclosure after hearing screams, to see the victim locked in the tiger’s jaws, ‘writhing badly in pain’.

‘Around 1.30pm, when we were in the reptiles area, we heard very loud screams,’

‘We saw that a white tiger had caught a boy by his neck and he was writhing badly in pain. He kept suffering for the next 10-15 minutes but nobody helped him.’

Another witness said the tiger kept ‘roaming around’ the enclosure, holding the victim by the neck.

Zoo officials said the man had appeared to have been ‘under the influence of alcohol’ and that security had tried to keep him away from the tiger enclosure.

‘Despite repeated warnings that he shouldn’t get too close to the outdoor enclosure, the man eventually climbed over a knee-high fence and small hedges, then jumped down 18 feet into a protective moat,‘ National Zoological Park spokesman Riyaz Ahmed Khan said via AP.

Authorities eventually frightened the tiger into a small cage inside the enclosure.

The man, whose body remained in the outdoor enclosure two hours after the attack, was dead by the time help reached him, Khan said.

The zoo remained open Tuesday afternoon, though authorities eventually roped off the tiger enclosure. At present the zoo is fielding criticism that it waited too long before intervening and that rather than jumping in the man had fallen in over low bank enclosures. Officials would later tell that they were preempted by the fact that they were not armed with tranquilizers to subdue the tiger. 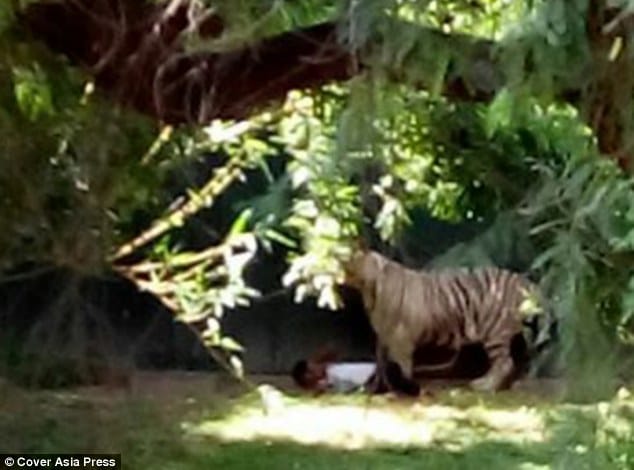