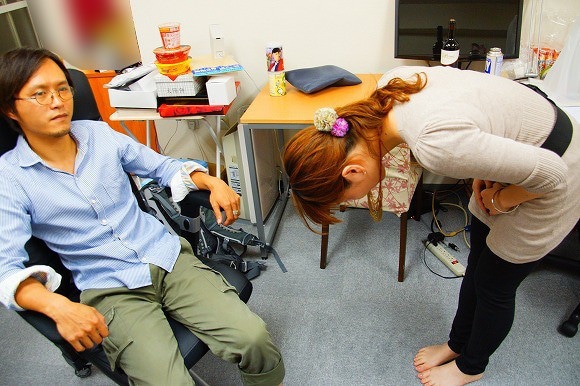 Have you ever been forced to say sorry when in truth you really didn’t want to? Or were simply too embarrassed or knew deep down you were’t really sorry? It’s a common conundrum of the human species, but such inconveniences it seems might be a thing of the past thanks to the growing proliferation of professional apology agencies making headway in Japan.

Explains thedailystar.net: It’s not easy to apologise, and most people would like to avoid it entirely if possible. Well, it turns out it is possible, if you happen to live in Japan. They have these ‘apology agencies’ through which you could simply pay someone to say sorry on your behalf.

By hiring an expert, not only do you get to avoid the discomfort, you also make sure that the person gets a proper apology. These agencies train their employees to handle things based on the gravity of the situation. These people are professionals, and it looks like they can get you out of all sorts of sticky situations.

The report goes on to tell that businesses are actually flourishing (who can necessarily say why or how and why for that matter the idea has hit it off in Japan or whether it will catch wind in the west?) with about 40 percent of agency’s customer base believed to be female, between the ages of 20 and 40 years.

The report also notes that some of the most popular reasons for approaching apology agencies are related to issues with money or love. Which is to wonder why most people ever end up in a courtroom to begin with.

And how much will it cost you to get someone else to say sorry on your behalf?

Although reports note that this can begin to add up as some receivers of apologies take up to 12 hours to forgive you.

A few agencies like Yokohama Benriya Natchan prefer not to reveal their prices – estimates are provided by phone consultation and they even offer ‘apologies while crying’ services for particularly angry people.

Rocketnews24 does tell that although the services are appealing in theory there exists the potential for pitfall, as the service allows people to short-cut a fundamental human experience (modesty and humiliation, something we could all probably use a little more of in our lives), with the propensity of such services allowing users to set up a web of lies that may complicate one’s life down the road. That being said, no such problems have been reported about these companies so far according to a local NHK report.

Isn’t it time you hired someone to tell the world how sorry you really ?