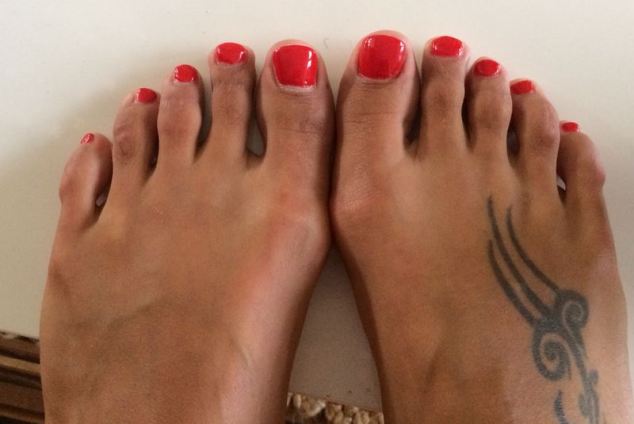 It seems there is a rising phenomenon here in the US that some women have come to resign themselves to. Called Cinderella surgery, the new trend involves surgeons literally altering the size of women’s feet and toes in an effort to allow women to more easily fit into traditionally tougher to wear but what many consider to be infinitely sexier shoes, aka designer shoes.

While the term Cinderella surgery may itself may sound benign, the procedure is anything but as women are subjected to the often painful experience of literally having their toes cut and re attached as smaller or longer digits (depending on the wearer’s foot) so as their feet may now fit into indelible designer shoes.

Other medical procedures include having bunions removed, the bottoms of feet injected with fat (as a permanent sort of soft insert), specifically for the expressed purpose of having feet better fit into certain shoes.

The trend comes off the back of tummy tucks, breast and nose jobs in recent years  and according to a piece published by  New York Times earlier this year, has fast become the must do among wealthy U.S. women.

Told Paulina Charlikowska via the UK’s dailymail: ‘It sounds silly, but I’ve always hated my feet and felt too embarrassed to get them out in front of my friends,’

‘Even as a child, I thought they didn’t look normal. I was revolted by them.’

‘It didn’t help that my feet were a huge size eight, which meant shoes looked ungainly, and my second and third toes were longer than my big toes. I would squeeze my feet into shoes two sizes smaller, so my toes were always sore and covered in corns. I knew I was making my feet look even worse, but I couldn’t bear to wear big, ugly shoes.

‘Because I work in the beauty industry, I spend all day looking at people’s feet, which made me even more unhappy with my own.’

Which is when Charlikowska hit on the rising trend of Cinderella surgery.

In fact so pronounced has the trend become, in one report via Fox 2, one woman asked a surgeon to amputate her little toes (he refused) so she could wear designer shoes. Another patient asked her podiatrist for toe liposuction.

Which raises the awkward question has Cinderella surgery become the  newest trend in cosmetic surgery to epitome of high-class vanity?

Contemplated Neal Blitz, a podiatrist who specializes in esthetic and reconstructive procedures in Manhattan and performs surgery at Mount Sinai Hospital: ‘My practice has exploded because of Manolo Blahnik, Christian Louboutin and Nicholas Kirkwood,’

Adding: ‘There’s nothing like opening a shoe closet that’s been closed to somebody for years.’

Cinderella surgery, first came to be coined by Beverly Hills podiatrist Ali Sadrieh after female patients of his began requesting esthetic foot surgeries 13 years ago, to correct things like ‘high-heel foot,’ ‘hitchhikers toe’ (when an unusually large big toe sticks out like a hitchhiker holding out his thumb) and ‘toebesity.’

By 2013 Paulina took the plunge and elected to have Cinderella surgery done, offering the following diagnosis:

‘It took an hour and although I couldn’t feel anything, I could hear my bones being sawed and crunched, which was horrible,’ she says. ‘There was no pain afterwards, but I had wires in my toes for five weeks and one toe became infected, so I had to take antibiotics.

‘After the wires were removed I walked using crutches for a couple of weeks before I could walk normally again, although I couldn’t exercise for six months.

‘Now I’m fully healed I have small scars, but they’re barely noticeable, and my feet are a size smaller now, too.’

‘My husband and friends still think I’m crazy to have spent £4,500 on my toes, but I believe that if you hate a part of your body and it’s affecting how you feel, there’s nothing wrong with  getting it fixed. I’m so proud of my new feet.’

That said not everyone thinks the surgery is necessarily such a smart move, with orthopaedic surgeons warning that many foot surgeries are highly invasive as they involve cutting toes open, sawing the bones in two and screwing them back together, so the potential for serious complications, including permanent pain and restricted joint movement, is high.

Other concerns include the fact that many Cinderella surgeries are now being done by podiatrists whose specialty normally centers around  in-growing toenails, corns, calluses, verrucas and not necessarily re attaching bones.

One traumatizing experience includes that of Danielle Sandler who experienced degrees of physical and emotional trauma after Cinderella surgery to straighten and lengthen her feet, telling:

‘I think now that the surgeon was more concerned with correcting the appearance of my feet than their function. He didn’t explain to me the impact the operation would have on my body as a whole.’

‘I can’t bend my feet enough to put them on, let alone walk in them,’

‘I’m resigned to the fact that most fashionable, sexy shoes are out of the question, and I’ll spend my life in flats.

‘People should think very carefully before they jump into having foot surgery for cosmetic reasons. It’s not worth the risk just for the sake of vanity — my feet are more painful now than they were before.’

Ultimately the choice of whether to proceed or not will be a personal choice but one is inclined to wonder how and why it has become so incumbent on women to change their appearances, to the point of breaking bones to look a particular part, to sway a man’s attention and ultimately feel better about themselves? Which is to ask how much of a woman’s sense of self worth is centered on her appearance?