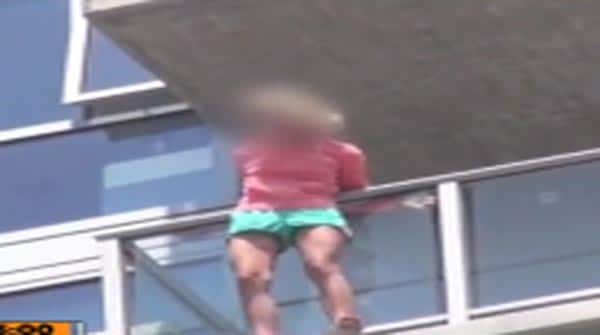 Kyoko Kozu, 35,  a Japanese mother has thrown her three children to their deaths out of a high rise apartment before jumping herself.

The purportedly distressed mother had come to shock passerby’s as they watched helplessly as the mother threw the children to the ground before joining the blood splattered bodies on the ground below her.

Police in the city of Yachiyo, 20 miles east of Tokyo, told the children thrown out included her eldest son, aged, seven, youngest son, two, and her six-year-old daughter.

Although all four were rushed to hospital, doctors said they were already dead on arrival.

Police said that the tragedy occurred shortly before 6pm on Saturday.

Mysteriously the mother and her children did not live in the building but resided about a mile and a half away.

It is unknown what Kyoko Kozu was doing in the apartment block but police said they assumed that the mother had thrown the children from a balcony on the 14th floor before jumping herself.

Authorities would later come to find a bag containing the woman’s belongings on the 14th floor stairwell.

At the time of the incident, Kyoko Kozu‘s 32-year-old husband was at work at the time, the Japan Today website reported.

Police have since sought to question the husband in an attempt to try to find out what might have motivated his wife to kill herself and their children.

Commentators on the web have since questioned the woman’s wisdom in taking her children’s lives along with hers, with others wondering if the crime was revenge inspired. Others wondered why no help or social assistance or counceling was afforded to the mother, conceding a degree of shame may have inhibited her.

The Shin River, which runs near the city is said to have a major pollution problem, with chemicals such as phosphorus, potassium and nitrogen draining from vegetable farms along the length of the waterway.