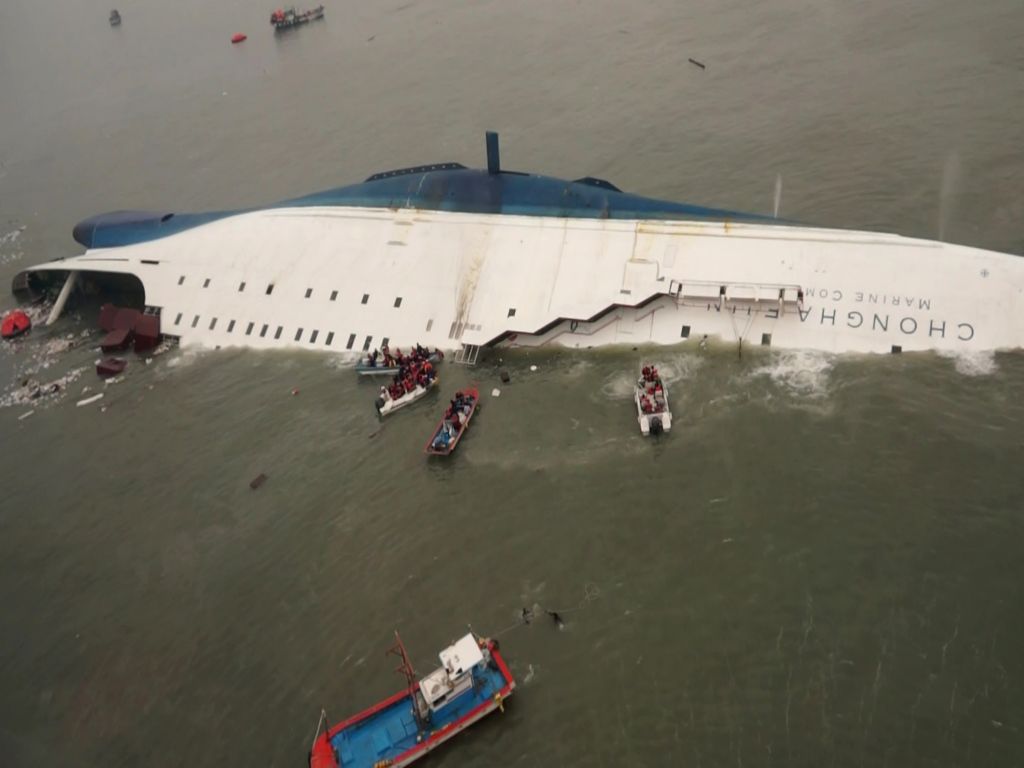 The report comes after the vice principal who accompanied hundreds of pupils went on to be saved whilst a further 274 students went unaccounted for in the recent ferry disaster.

There had been initial hopes that more students would be saved when the ferry capsized on Wednesday but as hours passed it was soon obvious that few if any survivors would ever be found.

The ferry, the Sewol had come to capsize carrying 476 passengers and crew on during a journey from the port of Incheon to the southern holiday island of Jeju.

The man, who had been reported missing since Thursday is thought to have hung himself with a belt from a tree outside a gym in the port city of Jindo where relatives of the people missing on the ship, mostly children from the school, were gathered.

Authorities told Kang later came to find a suicide note in one of the pockets of the vice principal after he was reported missing by a fellow teacher.

Since the travesty, twenty-eight people have been officially declared dead prior to the South Korea vice principal’s suicide. One hundred and seventy-four were rescued. Most of the missing are students from the Danwon High School on the outskirts of Seoul, who were on a holiday trip.

The government revised the total number of passengers and the number of people rescued, saying there had been further inaccuracies in tabulation, without elaborating.

As divers struggle to get to through murky waters, the likelihood of finding any of the missing alive is believed to be slim.

In the classrooms of the missing, fellow students have left messages on desks, blackboards and windows, asking for the safe return of their missing friends.

‘If I see you again, I’ll tell you I love you, because I haven’t said it to you enough,’ reads one message.

Investigations into the sinking, South Korea’s worst maritime accident in 21 years based on possible casualties, have centered on possible crew negligence, problems with cargo stowage and structural defects of the vessel, although the ship appears to have passed all of its safety and insurance checks.

The ship’s 69-year-old captain, was arrested early on Saturday after coming under scrutiny over witness reports that he was among the first to escape the sinking vessel during its 400-km (300-mile) voyage to Jeju.

According to investigators, Captain Lee Joon-seok was not on the bridge at the time the Sewol started to list sharply, with a junior officer at the wheel.

Lee faces five charges including negligence of duty and violation of maritime law. Arrest warrants were also issued for the junior officer and one other crew member for failing in their duty to aid passengers.

The ferry went down in calm conditions and was following a frequently traveled route in familiar waters. Although relatively close to shore, the area was free of rocks and reefs.

Lee has not commented on when he left the ship, although he has apologized for the loss of life.

Officials are investigating whether a third mate’s decision to order a sharp turn caused the boat to capsize. The abrupt turn took place at about 8:49 am, just ten minutes before the ferry’s first distress call, though officials cautioned they don’t yet know if the turn was made voluntarily or not.

Despite accusations of less than stellar play by the ship’s employees and possible suggestions that onboard school officials acted to the detriment to fellow students who did not have recourse to getting off the ferry, many parents continue to express deep anguish over the lost ones.

Told Park Geum-san, 59, the great-aunt of a missing student: ‘I want to jump into the water with them,’

‘My loved one is under the water and it’s raining. Anger is not enough.’

In the interim the South Korean captain, standing in handcuffs before reporters defended his order to delay the evacuation of his sinking ferry. A decision he may come to seriously regret.

It is believed that the Vice Principal of South Korea school ferry disaster ultimately came to blame himself for the disaster, saying in a hand written note that was later found that none of this would have happened had he not lobbied for the field trip.

Told the last sentence of the vice principal’s note: “In the afterlife, maybe I will be the teacher to the students whose bodies have not been found.’

Upon hearing the news that Kang had taken his own life, one middle-aged woman who was gathered with other relatives of the missing at the school, waiting for news, shouted that his suicide was a dishonorable act and a betrayal to survivors.