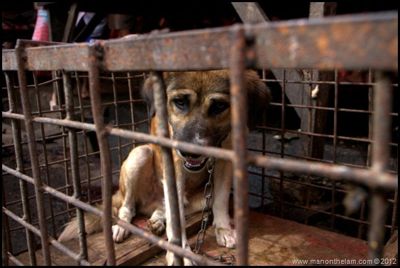 Shocking images have been released that depict what some have come to cal gastronomical delight: flame roasted dogs at Indonesian markets.

The macabre food stalls were witnessed by Oman-based photographer and blogger, Raymond Walsh, 44, who said it was easier to witness the dead and mutilated animals than it was to see the living dogs in cages awaiting their fate.

Tells Walsh via his blog: ‘It was typical of a lot of local markets in the developing world – lots of fruit, vegetables and fish. The only difference was the sheer number of dead animals for sale.’

‘It was easier to stomach the entrails of monkeys, rats on a stick and decapitated pigs than it was to see those live dogs awaiting their fate,’

‘The other animals seem foreign but I have friends who have dogs.’

In describing the differences of western culture versus Asian culture, Raymond Walsh offers: ‘Put simply, Westerners see dogs solely as pets. Indonesians see them as both pets and as sources of meat – it’s just how we’re raised.’

And in describing the contorted expression on roasted animals:  ‘After they are killed the animals are roasted over a fire, so the fur burns off, the skin tightens and peels back, causing that ‘screaming’ look,’

‘How they are killed depends on the animal. Cats, monkeys, and sloths are shot. Bats and rats have their heads clobbered against a tree or table. Pigs are stabbed with a sharp piece of wood or metal,’

‘Wild boars are killed as they as they are trapped. Snakes are slashed with a knife or have their heads cut off. Dogs are strangled with a rope.’

When asked to describe the smell, Raymond Walsh adds: ‘In a word, appalling. There’s something about the air that changes when there’s that much death around.’

‘It hangs heavy and it made me queasy and light-headed at the same time… It’s the first time I’d ever encountered anything like it.’

I have no objection to these people eating these animals, it is no different to us eating rabbit, lamb , beef etc….I do object to the way they are kept and killed, why can’t they do it humanely.