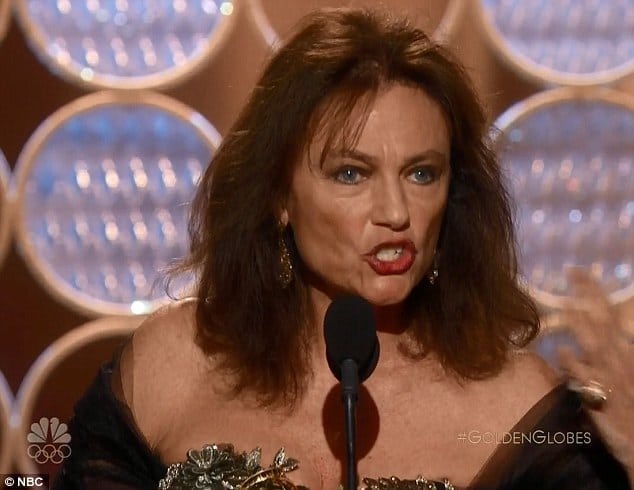 At the end of the day Jacqueline Bisset is only human, but before that she is an actress, a professional and a Hollywood icon, all things that were lost on Jacqueline Bisset as she went on to dizzily pick up a Golden Globe for Best Supporting performance in a series in the production of ‘Dancing on the Edge‘ (literally).

Since being ribbed by the media for her admittedly clumsy acceptance speech, her weird ramblings, her use of expletives and her failure to rush off after two gong music impromptus told her she was no longer welcome to make a fool of herself or the ceremony itself, the world has had a chance to cool down and accept that either way Bisset is the long standing Queen of panache and drama. Even if she had no idea that she still was when the award suspiciously came her way.

Needless to say the speech will probably be more remembered than the role that led to her winning in the the first place (at last after 5 nominations over the course of 45 years), but then in a weird way that’s how the world works. No one cares how good you look on the movie set, it’s the scandal before and after the movie set that we love. Something that Jacqueline Bisset was firmly reminded of last night.

Her wacky but heartfelt speech below, because even icons can sometimes surprise themselves too:

(Sigh) God. (Lip smack.) (Laugh.) Um, I think it was 47 years ago that the Hollywood Foreign Press gave me, promising, a nomination for the Holl-uh, Promising Newcomer!!! (Sigh) Thank you very much, Hollywood Foreign Press. I’m absolutely shaken. I can’t believe this. God knows you’ve nominated me about five times I think, anyway. (Sigh) (Lip smack) (Lip smack) (Sigh) OK! Scottish background to the front! OK! Um, I always wanted to do something for the BBC. And we did this. And this was great. Chiwetel, where are you? Can I see Chiwetel? I need him for inspiration. Where is he? OK. We had a good cast, didn’t we? It was great. Starz thank you for putting this on and, uh, (lip smack) thank you to my British agent, Steve Kenis, and my American agent, Harry Abrams. (Music begins) I…I’m sorry, I’m gonna get this together! I want to thank the people who’ve given me joy and there have been many! The people who’ve given me shit, I say, like my mother, what did she say? She used to say, “Go to hell and don’t come back.” However, however, however, my mother was not entirely me. I (laughs) believe if you wanna look good, you’ve got to forgive everybody. You have to forgive everybody. It’s the best beauty treatment. Forgiveness for yourself and for the others. (Blows a kiss) I love my friends, I love my family, and you’re so kind! Thank you so much! (Giggles) Thank you!