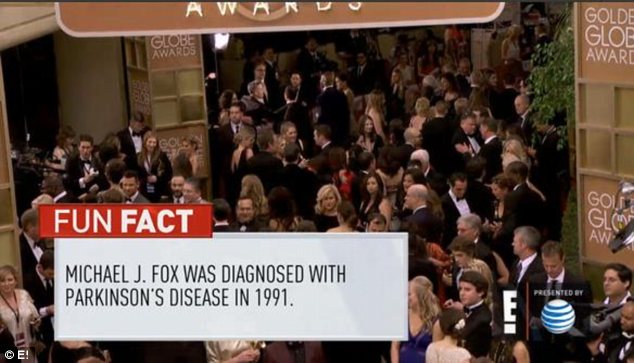 E! Entertainment managed to put their foot and then some in Michael J Fox‘s mouth last night as the network plastered the fact that Michael J Fox’s Parkinson’s diagnosis constitutes a fun fact about the actor.

The gaffe which has since tempted the ire of social media and forced the network to glibly apologize for their oversight has rekindled debated as to the blandness and insensitivity of entertainment reporting in general. Tragedy and hardship has now morphed into the trivial and fun. Nothing is out of bounds and the best an entertainer can do is weather the insensitivity and understand that the media world often fails to understand the subject matter it is reporting on.

As fact will allow, the 52 year old actor has had to deal with Parkinson’s for the last 22 years and it hasn’t always been smooth sailing for the actor who despite his early success in the tv sitcom, ‘Family Ties,’ was forced to deal with a real spanner in the woodworks after shortly marrying actress Tracy Pollen whom he met on the show, and would soon go on to have a child.

It wasn’t long the actor after being diagnosed that Fox descended into alcoholism and was forced to combat his own mortality (as we all do) and get on with life. Whether this constitutes a fun fact or not is in the eye of the beholder, but it seems for most such assessment is nonsensical, obtrusive and deeply offensive. It might be one thing for Michael J Fox to make light of his condition but then another for an established media network that ought to know better.

While Fox has struggled with his fate, he previously told he wouldn’t change his diagnosis even if he could.

Opined the actor:  ‘If I walked into a room with God or Buddha or Bill Gates or Sergey Brin or whoever could figure out a way to fix it for me, I don’t think I’d do it,’ he told Rolling Stone.

‘The point is, we all have our bag of hammers. We all have our own s**t. It’s like the parable about this circle of people and everyone takes their worst problem and puts it in the middle and they all get to choose one to take back – and they all end up choosing their own. And that’s kind of it. You’d always take your own problems back over someone else’s.’

Which raises the question how long will it be before certain segments of the media actually pay attention to the subject they are reporting as real human beings as opposed to pleasant sound bites that one can chart on a countdown of mindless gunk that is suppose to count for real reporting? It just doesn’t and E! News knows it, then again one suspects many have known it for years too….