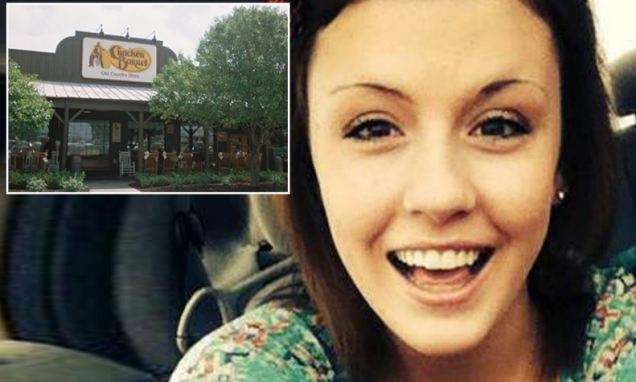 Abigail Sailors has something to be very cheerful about, but then again it’s because she was cheerful in the first place that led to the Nebraska Cracker Barrel waitress landing herself a $6000 tip from a pair of customer.

It all came to be when two customers Abigail was serving came to ask her why she was so happy. That’s when the 18 year old revealed she had spent nearly her entire life in foster care

So moved where the anonymous tippers that one of them immediately took out their checkbook.

Told the waitress: ‘I couldn’t believe it. I tried to thank them, and they said, “Thank God.”‘

The tip will now now help Abigail to finance college.

When the customers first came into the Cracker Barrel they had asked to be seated with the grumpiest waitress but, after being told all the staff were happy, they were put with the most cheerful – Abigail.

As they questioned the 18-year-old, she revealed a tragic life where she lived with an abusive stepfather after her mother was seriously injured in a car accident.

Abigail was seven months old when her parents crashed on a country road, leaving her mother brain damaged, Gawker reported.

After April’s father was declared unfit to care of her and her four brothers and sisters, they were moved to a foster home.

‘All the horror stories you hear about foster care, we lived through it,’ Abigail’s sister, Sydnie, told the Lincoln Journal Star.

Their foster father was eventually jailed for abuse, and the siblings were sent to live in separate homes.

Abigail, Sydnie and one of their brothers were moved back with their biological father, but he too was arrested for abuse.

The siblings didn’t experience any love or stability until John and Susi Sailors took them in nine years ago.

‘I don’t know how I would have turned out if I didn’t have them. They shaped the person I am today,’ Abigail, who has adopted the couple’s family name, told.

Along with telling the customers about her difficult upbringing, Abigail Sailors told them of her plans for the future, and how she had just completed her first semester at Trinity Bible College in North Dakota.

Despite not having the funds immediately available to be able to return for the next semester, she told the men she couldn’t wait to continue her studies in youth ministry and psychology.

It was at that point that one of the customers, who had attended the same college, wrote out a check to pay $5,000 in tuition fees and $1,000 in school supplies.

The men also left a $100 tip which Abigail shared with another waitress.

Recalled the waitress: ‘I said, “Are you serious”,

‘It’s always been my dream college to go there and play basketball, and go to a Christian school where I can seek God.’

Her foster father was also full of praise for Abigail, saying: ‘She’s always been a good worker and paid her own bills and saved her money.

Adding: ‘She’s a great girl. It’s amazing where she is from, what she’s been through.’

Abigail is now heading back to school next week. Shouldn’t you have something to be happy about too?