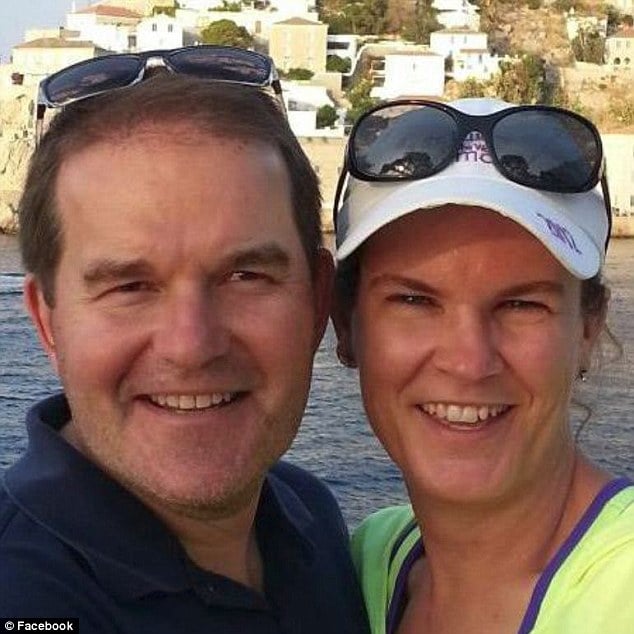 It seems radiologist Brandon Fisher has got a pickle on his hand and then some.

It all came to a head when the man’s wife, 42 year old Angela Siler-Fisher, herself a doctor came to find out that her radiologist husband was carrying on an affair behind her back with another fellow radiologist, 35 year old Marcelle Mallery.

That unfortunately didn’t go down too well for Siler-Disher who decided to take matters into her own hands when she decided to show up announced at the woman’s house and explain to her which way was up.

At the time Siler-Disher broke into her husband’s alleged mistress house to go on to scrawl ‘whore‘ and ‘home wrecker’ in lipstick (naturally) on the woman’s bathroom mirror as well as littering her staircase with condoms.

The woman is also said to have gone on to harass Mallery, calling her incestuously, threatening to ‘beat her fuxking axx‘ a ‘whore’ and ‘dislocate her vagina’ as well as sending her 25 text messages over the next 16 hours, including one with a photo of her bedroom.

For her troubles, the mother of two has since gone on to be charged with criminal trespass and harassment in what has been described as ‘an out of character’ outburst that occurred this past weekend.

At the time of the carnage, Marcelle Mallery had gone on to be warned by her fellow radiologist love interest that ‘trouble’ was on its way.

Mallery went on to tell cops that she was in fear for herself and her children, so she fled the residence.

Media reports go on to tell Siler-Fisher is the medical director at Ben Taub Hospital’s Emergency Center as well as a professor at Baylor College of Medicine, where her romantic rival went to college.

Neighbor and friend, Chris Pancheri, went on to tell KHOU.com he was shocked at the allegations against the doctor and said she must have had good reason to snap.

Told the man: ‘She’s probably the most sane person in this neighborhood that I know,’

‘She’s an extraordinary doctor from what I know, great wife and mother. She’s a great woman.’

‘Most people’s reaction would be a lot bigger than that one. I thought the other woman got off easy.’

Siler-Ficher was taken into custody but has since posted bond. She is scheduled to be arraigned in Harris County District Court on December 11, according to The Smoking Gun.

A spokesman for Bayor College told in a statement: ‘We understand that this is a private matter for Dr. Fisher and does not impact her work at Baylor College of Medicine.’