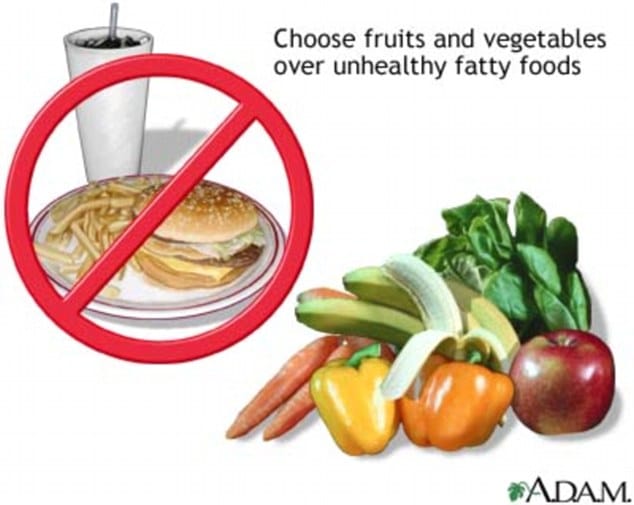 It seems the folk over at McDonald’s are struggling to come up with a definitive policy towards their employees.

Case in point, the latest furore involving their internal staff site, McResource Line which earlier this week went on to advise employees to stay clear of fast food. Which is of course sensible advice under any circumstance, but perhaps not when you happen to be in the business of junk food in the first place.

Told the site: ‘Fast foods are quick, reasonably priced, and readily available alternatives to home cooking. While convenient and economical for a busy lifestyle, fast foods are typically high in calories, fat, saturated fat, sugar, and salt and may put people at risk for becoming overweight,’ reads one post on the site, which includes a picture of a hamburger and fries, two items that the fast-food giant specializes in selling.

The anti-fast food advice was given with graphics depicting the ‘unhealthy choice’ and the ‘healthier choice.’

Despite featuring a vast array of deep fried delicacies, the Golden Arches reminded employees that ‘avoiding items that are deep fried are your best bet.’

The snafu comes off the back of other ill advised gestures which this year which have included urging employees to sell their things,  apply for food stamps and get second jobs to make ends meet (a tacit admission that no one can survive on the $7.25 minimum wage that the outlet pays) as well as one press release imploring workers to tip aupairs, pool cleaners. Things that the average middle class person would struggle to hire in the first place, let alone a McDonald’s employee.

McDonald’s also saw backlash after it advised employees to get out of holiday debt by returning unopened purchases and after it published a budget guide that included no money for heat and $20 a month for health care.

Perhaps aware of the latest public relations disaster on their hands, McDonald’s went on to close McResource line, offering the following if one went to the internal worker site:

‘We are temporarily performing some maintenance in order to provide you with the best experience possible. Please excuse us while these upgrades are being made,’

Told McDonald’s in a statement: ‘A combination of factors has led us to re-evaluate and we’ve directed the vendor to take down the website.’

Between links to irrelevant or outdated information, along with outside groups taking elements out of context, this created unwarranted scrutiny and inappropriate commentary.

‘None of this helps our McDonald’s team members.’

A McDonald’s spokesperson has told the messages had been ‘taken entirely out of context.’ Never mind that McDonald’s has taken its nature, its product and its employees out of context in the first place…

As an aside McDonald’s has also told that it has begun offering a slew of new healthier food choices, which might be true but the reality is the outlet makes most of its sales in the serving of unhealthy, saturated foods.