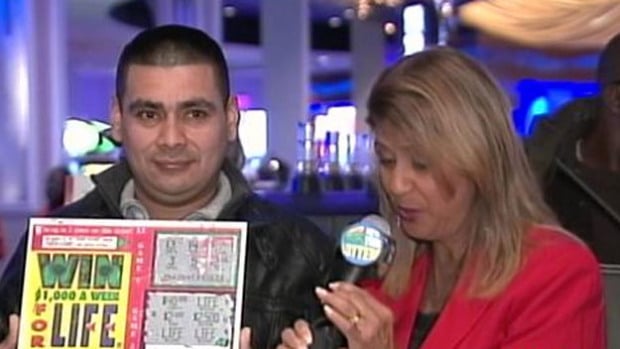 Marvine Rosales-Martinez, a Long Island landscaper who came to find a $1 million lottery ticket whilst blowing tickets at his landscaping job last fall, was allowed to collect his $1million prize this week.

The landscaper was one of five winners who were handed oversize checks by NY Lottery officials this Friday.

Rosales-Martinez chose to take his prize in a lump sum. After taxes, he will walk away with $515,612.

The 27-year-old man, who only recently got married, told that in November 2012, he was doing yard work at a client’s home in Bayville when he spotted a ‘Win $1,000 a Week or Life’ scratch-off ticket in a pile of soggy leaves.

‘I still don’t know what made me pick it up,’ he told the New York Post.

Rosales-Martinez took the ticket home and dried it off before heading to a local New York Lottery office, where it was confirmed that he was in possession of a winning ticket.

Before Marving Rosales-Martinez could collect on the money, the lottery conducted a year-long investigation to make sure that the ticket was real, and that the person who had originally purchased it would not contest Martinez’s claim.

‘A standard and thorough internal security investigation found no reason to believe that the ticket wasn’t rightfully the property of Mr. Martinez,’ a spokesman for the New York State Gaming Commission said. ‘There was no ­report of theft or of a ticket being misplaced.’

The landscaper’s mother, Maria Martinez, admitted to the New York Daily News that she had told her son to throw out the waterlogged scratch-off card when he found it, but now she is glad he didn’t heed her advice.

Martinez, a recent immigrant from El Salvador, said that his windfall would not change the way he lives, adding that he will continue working six days a week.

He plans to send some of his prize money to his family back home, help out his mother, buy a house and use a portion of it to take his new wife on a honeymoon to Miami.