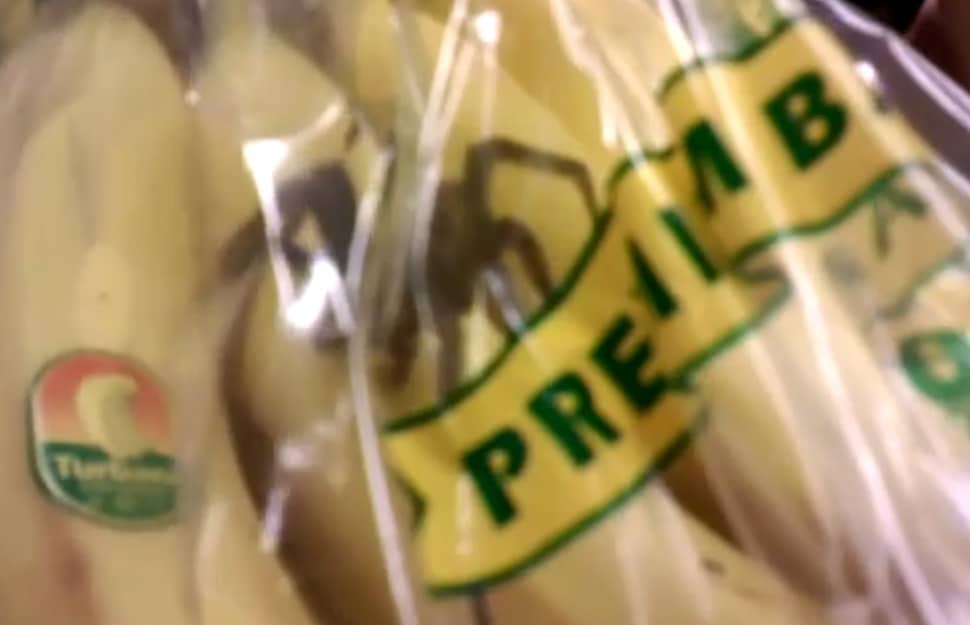 A 29 year old London woman, Consi Taylor has lived to tell how she nearly came to eat a banana bursting with spiders.

The near fatal faux pas came to pass when the woman came to eat the bananas she had recently bought at a local Sainsbury’s supermarket.

Settling in to get her jab of potassium (yes kids bananas are yummy and full of potassium to keep you jumping jacks) Consi Taylor suddenly noticed something rather untoward.

Told the suddenly horrified shopper: “I thought it was mold,”

“[B]ut when I had a closer look I saw some funny looking spots…and was horrified to see they were spiders. They were hatching out on the table, scurrying around on my carpet.”

Kids, does this sound one of those episodes of fellow restaurant onlookers jealously bemoaning the fact that there are no flies in their soup as well?

gawker: Before realizing she was dealing with dozens of Brazilian wandering spiders (AKA banana spiders) — a highly aggressive, highly venomous spider certified as “the most toxic” by Guinness World Records — Taylor attempted to return the bananas to the Sainsbury’s supermarket where she’d bought them.

For her troubles, Consi Taylor was initially offered £10 ($16) but after sending a photo of the spider to a pest control specialist, Taylor, her husband Richard, and their two small children were ordered to hastily leave their house and never return. Yes kids, some bananas have more potassium than one can ever bargain for.

Sainsbury’s went on to subsequently offer to pay the full cost of the necessary extermination, as well as pick up the tab at the hotel where the Taylors were temporarily put up.

Sainsbury’s has since apologized for the incident (one hopes) but nonetheless have gone on to insist it has “rigorous controls on imported products at all stages“ which significantly reduce the instances of killer spiders bursting from bananas and attacking patrons. Yes that ought to relieve us all.

Reflecting on her near diabolical eating experience, Consi Taylor told:

“I now have a phobia of buying bananas. We don’t know whether they’ve all gone.”

Who ever knew that bananas could be this dangerous, not you or the fugly little spider in your belly begging for more banana snacks….