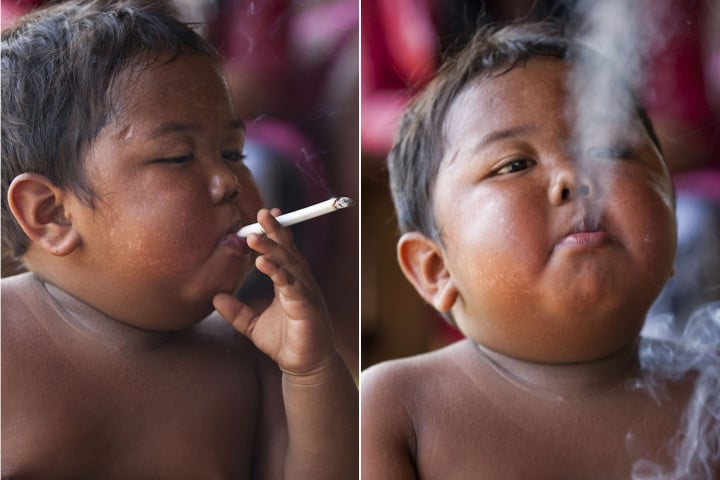 At the time Indonesian cigarette smoking toddler, Aldi Rizal had the world in disbelief when it was first reported the then 4 year old toddler was smoking up to 40 cigarettes a day (he purportedly started smoking when he was only 2 years old) but now reports have it that the toddler has given up smoking only to now become addicted to junk food.

At the time of Aldi Rizal’s smoking habit the Indonesian government went on to be widely condemned for perpetrating a culture which allowed youths such as Aldi smoking.

The boy was soon taken to play therapy sessions away from his poor village in Sumatra and transferred for a period of two weeks to Jakarta, the capital. From there the boy was coaxed to take his mind off his habit and simply learn to be a normal toddler for the first time.

That said a new documentary now shows the boy two years later off cigarettes but now addicted to something equally as dangerous, junk food.

In the video we learn that during the boy’s rehabilitation psychiatrists encouraged his mother to keep him busy playing whilst teaching her about the dangers of smoking.

One of the therapists, Dr Kak Seto in fact from time to tie still comes out to see the boy and his family ensuring that he is not falling on to bad habits.

Tells the boy’s mother, Diane Rizal, 28: ‘There are many people still offering Aldi cigarettes, but Aldi no. He says “I love Kak Seto. He would be sad if I started smoking again and made myself ill.”

‘At first when we were weaning Aldi off the cigarettes he would have terrible tantrums and I would call Dr Seto for help.

‘But now he doesn’t want them.’

Yet it seems Diane Rizal has new worries to contend with as her son’s weight has shockingly gone way up (he has since fallen back to 56 pounds, still quite large for his age and height) as he has replaced his craving for smoking with that for food.

Mrs Rizal goes on to tell how the strong-willed little boy now demands food in the same way he used to beg for cigarettes, and the family struggles not to give in to his tantrums.

Tells Diane Rizal: ‘When Aldi first quit smoking he would demand a lot of toys.

‘He would bang his head on the wall if he couldn’t get what he wanted. That’s why I get him cigarettes in the first place – because of his temper and his crying.

‘Now I don’t give him cigarettes, but he eats a lot. With so many people living in the house it’s hard to stop him from getting food.’

Aldi also helps his mother and father Mohamed out on their market stall, where his bright bubbly character and cheekiness wins him lots of attention.

‘I feel happy when people want to speak to him because the know him,’

‘But I feel annoyed when they refer to him as ‘the smoking kid’. It makes me feel like they are accusing me of being a bad parent.’

The boys parents soon decided to take Aldi to a nutritionist for medical checks and now they’ve been given advice on how to put him on a healthier diet so he can start to lose some weight.

‘I think it is difficult for them. The mother says Aldi is a spoilt kid. If Diana wants to forbid him eating, it will be hard.

‘She will need the cooperation from the entire household. One obvious thing is they let him have too much condensed milk. He drinks three cans a day and eats too many carbohydrates.’

Paediatric specialist Dr William Nawawi is also concerned that smoking at an early age has made Aldi more likely to suffer weight issues.

He explained: ‘Nicotine can increase the endocrine hormone in the body. This condition can cause resistance to insulin.

‘The blood will not be able to break glucose from food. This will make Aldi become bigger and bigger.’

Back at home in his fishing village and on a strict diet with lots of fresh fruit and vegetables and smaller portions, the boy’s family are hopeful that their son will gravitate to normal.

That said, it has required Diane Rizal persuade Aldi’s siblings and the rest of the family not to give in and provide him with junk food when she is not around.

Doctors hope that if Aldi can lose around 14 pounds, his weight will eventually even out as he starts to grow taller.

It is thought one-third of children in Indonesia try smoking before the age of ten. The Government has launched efforts to tackle the problem.