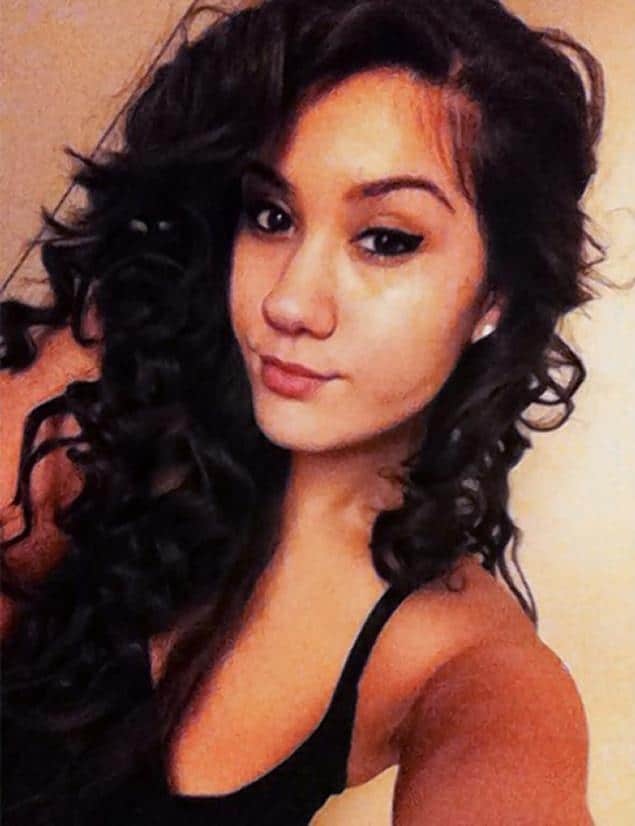 Kayla Mendoza a 20 year old self proclaimed ‘pothead princess’ has gone on to cause national headlines after she got so stoned she couldn’t tell that she was furiously driving down on the wrong side of the street. Her stupidity led to the death of two young women and her now being in very serious condition.

Of particular note and media attention is how the pothead princess from Hallandale Beach, Florida went on to tweet hours before that she was ‘2 drunk 2 care.’ The results of such sentiment have unfortunately come to be fully realized, woefully by the parents of the deceased girl as well as her own family.

Killed along Florida’s Sawgrass Expressway last Saturday included that of Marisa Caran Catronio and Kaitlyn Nicole Ferrante. Both were best friends who were returning from a night on the town. They had headed out to celebrate Caran’s 21st birthday.

I know life can be brutal.

At the time, Catronio was pronounced dead at the scene whilst Ferrante was rushed to a hospital, where she succumbed to her injuries just the other day. The pothead princess for her part is now in critical condition fighting for her life.

As the media begin to dig into the story, the  Miami New Times has come to tell how Mendoza had a thing for letting the world know that she was on a bender.

Posting under the user name ‘Kaila Mendoza,’ the T-Mobile sales associate we are told has to date fired off dozens of tweets about being high and rolling blunts. Including the one ‘2 drunk 2 care’ three hours before last Saturday’s fatal crash. 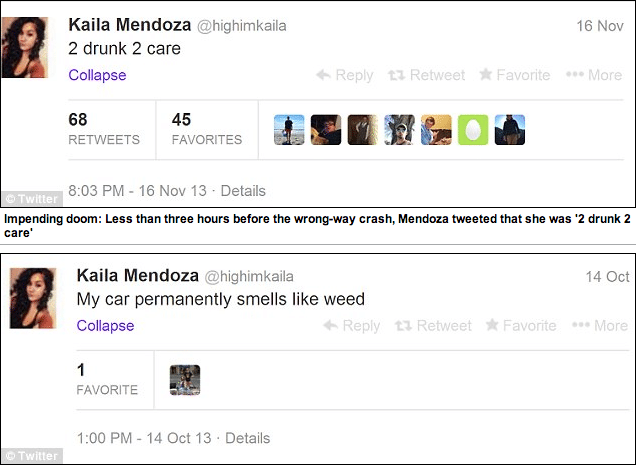 In the days and weeks leading up to the crash, the 20-year-old graduate of Broward College lamented that her ‘car permanently smells like weed,’ described her state as ‘2 high 2 care’ and boasted about ‘rolling a blunt in the airport parking lot.’

Her Twitter account, which has not been taken down as of Thursday evening, is also peppered with images of what appear to be marijuana cigarettes and piles of weed.

On November 9, Mendoza tweeted: ‘Can’t sleep without my bedtime blunt.’

A week earlier, she shared with her 631 followers: ‘I really am so baked right now.’

Told Catronio’s father, Gary: ‘My little girl is not here anymore because of the negligence of a driver driving on the wrong side of the highway,’

‘This has to be stopped. We’ve got to do something to prevent this.’

Police have yet to charge Mendoza in connection to the deadly accident.

Please, tell me, WHAT GIVES ANYONE THE RIGHT TO DRINK, SMOKE DOPE AND DRIVE, BONKERED OUT OF THEIR HEADS?

This vain, defective ”princess,” in her kingdom of entitlement, unabashedly boastful, in her wicked, narcissistic universe, musing to the world inside her pink IPhone; ”2 drunk 2 care,” and two hours later, after more booze and more dope, becomes a living missile, driving the wrong way on a 75mph highway to h.e.double-l.