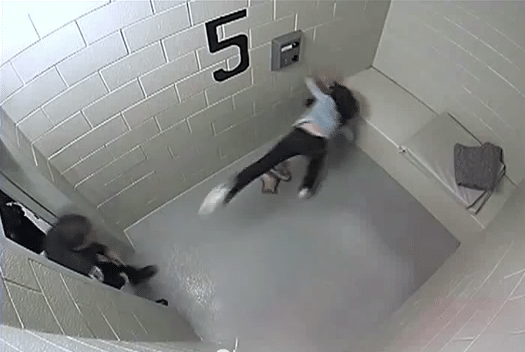 A new video making the rounds involves that of police seriously injuring Chicago woman, Cassandra Feuerstein after she went on to be shoved by a police officer head first into a jail cell bench.

The incident came to pass on March 10, after Cassandra Feuerstein was arrested by the Skokie Police Department after  her vehicle pulled over on the side of the road and cops found her intoxicated asleep behind the wheel.

In a video released Wednesday by Feuerstein’s attorney, Torreya Hamilton, an officer can be seen acting with what he said is excessive force.

Feuerstein allegedly asked to call her husband and children. Officer Michael Hart called her out of the cell. After having gone to the front counter, the woman is then returned but not before Officer Hart launches the woman back into the cell where she hits the bench face-first.

The 110-pound woman can be seen collapsing on the floor, her face bruised, bloodied, and allegedly broken in several places. Hart walks over to her briefly before turning around.

“He was not apologetic at all,”

From there two officers go on to help Feuerstein. A male officer helps her sit up and cradles her as a female officer works to stop the bleeding from her nose.

Went on to tell Hamilton:

“The video speaks for itself,“

“She does nothing to justify what this male police officer does.”

Feuerstein said several bones were shattered in her face, and she required reconstructive surgery and a titanium plate in her cheek. Photos taken show her battered face and blood-red eye.

Told Hamilton: “I think when you look at this and you see the video which we are so fortunate to have, I think what you see is this is like the cowardly act of a bully,“

Hart at the time filed a complaint against Feuerstein for resisting a peace officer. Those charges were later dismissed after Cook County prosecutors reviewed the evidence. Feuerstein pleaded guilty to drunk driving.

Feuerstein claims the officer then filed a false report claiming she resisted police to explain his actions, according to CBS.

‘Apparently I was not looking into the camera the way the officer wanted me to’, she said at a press conference yesterday, referring to having her mugshot taken right before the incident.

Hart is still employed and has not been charged with a crime, Hamilton at present has gone on to launch a lawsuit on her client’s behalf…

Sometimes one can hardly tell the difference between the criminal and the police…. 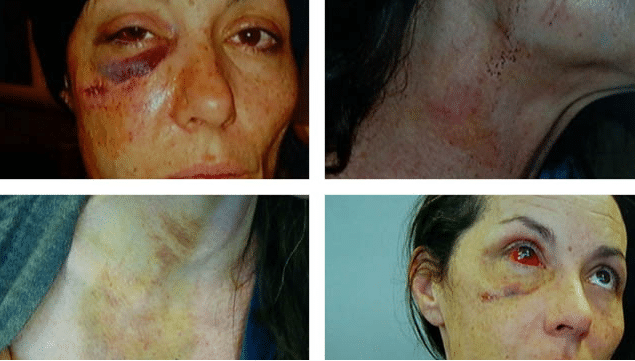