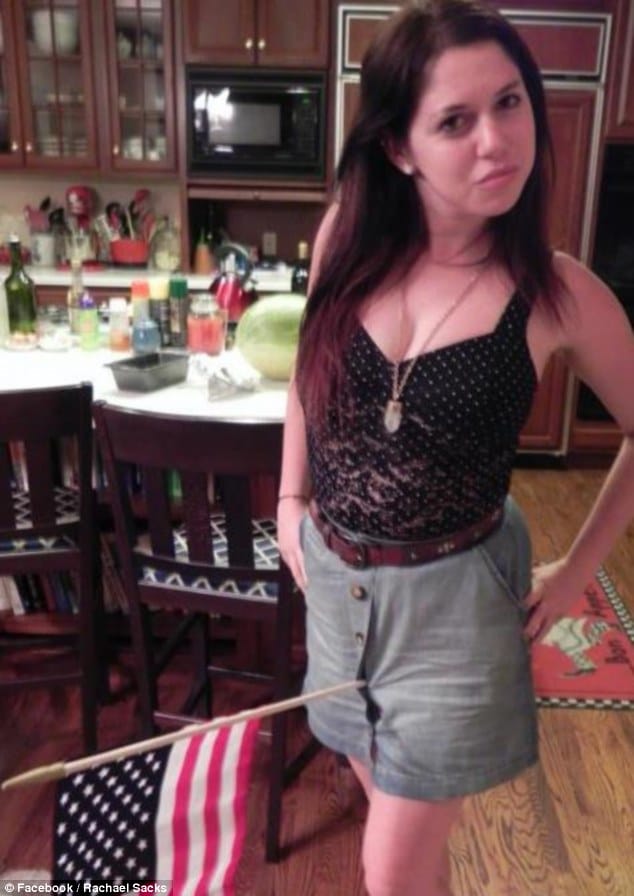 Rich college girl, Rachael Sacks who went on to cause a shit storm after writing an unrepentant essay demanding that ‘poor’ people stop trying to make her feel bad for being rich has gone on to tell she is now in the market to hire a publicist and a stylist.

The twenty year old who happens to be enrolled in one of the most costliest tertiary programs in the nation, at NY’s New School’s $40 000 a year writing arts program, had first gone on to be the cause of wide furore after penning an essay where she went on to bemoan the jealousy of poor people.

Since achieving notoriety, Sachs has told the nypost she is now considering hiring a publicist and a host of other professionals that her ‘level of fame’ usually entails.

Told the rich college girl: ‘Maybe I’ll get a publicist, I don’t know, people are suggesting that to me,’

Possibly aware of the flack she has received over her appearances which many have gone on to describe as dowdy and mere pedestrian, Sachs went on to offer the following:

‘I look so bad. I was really unprepared. Oh, I look disgusting, whatever.’

‘Most other people at this level of fame get a hair and makeup team. I apparently don’t,’

Asked if she thinks her father, who Sacks openly admits has a predilection towards spoiling her, will cut her off after the hurl of abuse the twenty year old received, the rich college girl told the Post it will probably happen in a few years. Her plan then? Graduate school.

Sachs posited that she’ll just ‘go to a grad school that basically pays for probably 75 percent of what everything is… wherever will take me.

The rich college girl first came to notoriety after an essay she published on Thursday on Thought Catalog where she went on to describe how a cashier at a grocery store close to her affluent West Village apartment was unfriendly and frowned at her because she was carrying a large shopping bag from the high-end designer Mulberry.

Blogged Sacks at the time: ‘I am sorry that I was born into great financial circumstances and my father likes to provide for me. I am sorry I don’t have to go to a state school to save my parents money. What do you want from me?’

After having gone on to receive wide condemnation for her essay, Rachel Sacks took to the sidewalk outside her Manhattan home, a second-floor apartment in a pre-War townhouse, whereby she went on to defend her views.

Told the rich college girl in response to the avalanche of criticism she has received: “I didn’t think anyone would take this seriously. This is surreal — and exciting,”

“I’ve been getting some fantastic terrible responses. ”

Went on to contemplate a variety of commentators on twitter:

‘Yes, let’s all pity and feel bad for poor, judged, not smiled at,’

Told another: ‘What a spoiled brat. Your parents did a horrible job of raising you. The level of entitlement in this article is mind blowing. No one is born spoiled, entitled and snobby.’

Asked if she had any regrets about her essay, Rachel Sacks went on to tell the UK’s dailymail on Friday: ‘No, I’m not repentant about what I said. I don’t regret what I said.

‘If people paid attention and realized what I was saying it’s that you shouldn’t shame people for what they are, what they have.

‘I shouldn’t have to pretend to be poor to make people like you, that’s stupid. You should be who you are and other people should accept it.

Went on to tell the embittered rich college girl: ‘The criticism and the attention is stupid. I’m young, I’m irrelevant, why don’t you care about other things?

‘It must have been a really slow, horrible news day. I was looking at CNN too and all the stories recently have been really bad, something about some sea monster washing up on the beach in California. Why is this a number one story? Go and find something else.’

While admitting that no one made a direct remark about her ‘rich’ status whilst picking up a snack at a Gristedes store, in her local neighborhood, which had initially sparked her essay, ‘I’m Not Going To Pretend That I’m Poor To Be Accepted By You,’ the rich college girl did note the following: ‘They [cashier and another customer] made a whole thing, going through me and piecing together my life and who they think I am.’

Interestingly the dailymail make a point of telling that they approached Gristedes in hopes of receiving a comment but were told that no one at the store recognized or remembered the incident and were unable to comment further. One would assume to Rachael Sacks utter dismay.

Told in part Rachel Sacks essay: ‘People shouldn’t make others feel bad about their own personal finances. How people spend their money is their own choice.

‘It just seems really petty and makes you look bitter and unhappy with your own life if you are casting nasty glares at college girls in Gristedes because you’re a cashier.’

Goes on to argue Sacks: ‘I’m not one of those people who try to be poor to relate to people.

‘I think that’s honestly really disgusting behavior, it’s as if you’re saying that you have to make yourself into something you think is beneath you to get others to like you.’

Asked if she was being shocking for the sake of being shocking, Sacks went on to contemplate: ‘I believe in what I said but I do like shocking people a lot more and talking about things that people don’t want to talk about.

Went on to tell Sacks: ‘It’s obnoxious to label people in terms of their status, such as being ‘poor’ or ‘homeless.’

Despite the massive influx of online criticism, Miss Sacks doesn’t appear to have changed her mind.

‘I’m rolling my eyes because I definitely don’t deserve this much attention.’

And then there were these comments on the web that caught my attention as well:

No one should hate on anyone for what they have or don’t have, but if she really thinks her Dad’s wealth is the reason people have a problem with her…well, she’s young and just doesn’t have a clue yet that there’s a difference between rich and spoiled (and it’s probably the latter that set people off)

her personal wealth is zero, but she’s yet to realize that. her father is upper middle class, not exactly rich if we’re going to split hairs. her cashier story isn’t even believable; it’s far more likely she received a side-eye for her behavior rather than any shopping bags she carted around (assuming any of it was real). she is a spoiled brat looking for attention in a poorly-written tantrum of a blog. she’s too young and dumb to realize the internet follows you forever… i hope her ‘education’ is just an exercise in finding a rich husband to support her, because she’ll have a hard time achieving gainful employment with this track record.

I don’t know who is worse, the disordered child, or the heartless haters. This is just sad. The world is void of love.