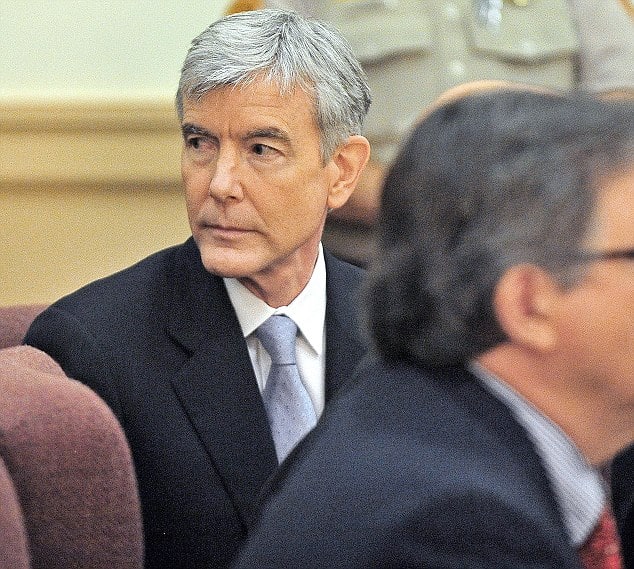 Broke financier, Steven DeMocker has been found guilty of murdering his ex wife after he sought  to avoid paying alimony payments and claim her $750,000 life insurance policy.

As the verdict was read out at the Arizona courthouse, the 59 year old fallen financier’s daughters,  Katie and Charlotte, openly weeped in court, following a two and half day deliberation.

The court went on to hear how Steven DeMocker’s former wife, Virginia Carol Kennedy, an artist, and an ‘adventurous, radiant, wise, humble and accomplished woman’ went on to be viciously bludgeoned to death with a golf club (a 7-wood, a Big Bertha made by Calloway)at her home on the night of July 2, 2008.

So hard had the woman been beaten, that her skull is said to have shattered

The golf club would not go on to be found but investigators were eventually able to locate the club’s head cover.

The court then went on to hear how Steven DeMocker who worked as a financial advisor at UBS Financial Services solely on commission, went on to be wiped out after the 2008 crash.

That said at the height of his career, the financier was said to have earned hundreds of thousands of dollars a month.

Despite Steven DeMocker large haul, the court went on to hear how the financier spent more than he made and consequently went on to amass a large  debt.

When the economy crashed, DeMocker’s take-home was slashed.

One month he was paid nothing.

From there his marriage to Kennedy fell apart (naturally) and according to an email exchange following their separation, DeMocker was borrowing $20,000 a month from his father to pay his bills.

Some of these bills were alimony payments to Kennedy, which were $6000-a-month.

Steven DeMocker soon decided he would kill Kennedy, the prosecution said rather than pay her.

The UK’s dailymail goes on to note that the defense  countered that authorities didn’t properly investigate Kennedy’s death and tried to direct attention to a man who lived with her at the time but who has since died.

Nevertheless, Steven DeMocker was found guilty of first-degree murder and six other counts: first-degree burglary, three counts of fraudulent schemes and artifices, evidence tampering, and a misdemeanor charge of contributing to the delinquency of a minor.

DeMocker also had floated a story about a voice in the vent at the Camp Verde jail after his arrest that said his ex-wife was ‘killed by two guys from Phoenix.’

DeMocker is scheduled to be sentenced Nov. 13.

As the verdicts were read, DeMocker sat stone-faced, never reacting.

The prosecution have not pushed for the death penalty. The verdict came after a former mistrial and back and forth allegations which saw the court viewing secret documents and an effort to dismantle the case.