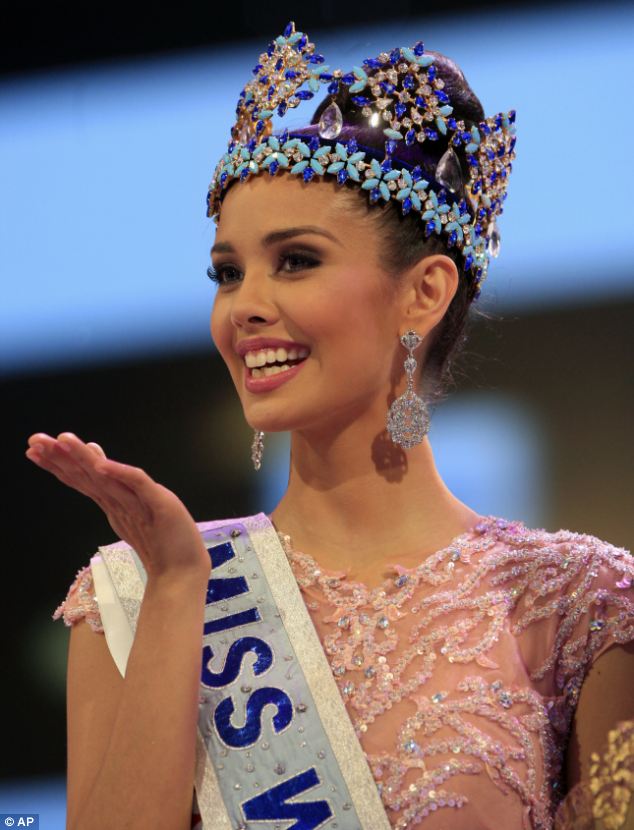 Miss Philippines, Megan Young has gone on today to be crowned Miss World 2013, this despite threats of Islamist violence as the competition took place on Indonesian resort island of Bali.

With the competition taking place amid tight security in the Islamist nation the 23 year old went on to beat 127 other contestants who had coveted the title.

Prior to the event taking place, Islamist group, Islamic Defenders Front (FPI) had issued threats against the event branding it akin to ‘pornography‘ and a ‘whore contest.‘

Told the newly crowned Miss World, Miss Philippines, Megan Young, perhaps fully aware of the ensuing tension around her: ‘I promise to be the best Miss World ever.’

Leading into the event, the Islamist group had demonstrated for weeks, calling for the government to cancel the pageant, arguing the event showed too much skin and went  against Islamic teachings.

In an effort to somewhat pacify the group, Miss World organizers had earlier agreed to cut bikinis from the swimsuit competition – replacing them with more conservative sarongs.

Nevertheless pressure continued to mount – with more mainstream groups joining in and calling for the show to be banned.

In a move to appease the group, Indonesia’s government had announced three weeks ago that the final would be moved from the outskirts of the capital Jakarta to Hindu-dominated Bali, where extremist influence is minimal.

That said the threat of potential violence lingered as Haidar Al-Hamid, the head of the East Java province branch of the FPI, had previously claimed that the group planned to travel to Bali today to disrupt the contest.

British, Australian and US embassies issued warnings to citizens planning trips to the resort island during the competition, saying there could be large-scale protests or even attacks.

Umar Faroq, the director of vital security for Bali provincial police, said thousands of security forces had been deployed to secure the final.

Went on to tell Faroq, ever mindful of the up  the upcoming Asia-Pacific Cooperation summit in Bali: ‘The success in securing the Miss World final will be a benchmark for the police in securing the incoming APEC Summit.’

The houstonchronicle goes on to note that Miss World is the latest controversy in Indonesia, the world’s most populous Muslim country, where most follow a moderate form of the religion. However, a small extremist fringe has become louder and more violent in recent years, attacking Christians and other religious minorities, along with anyone else deemed immoral.

Last year, the Islamic Defenders Front forced Lady Gaga to cancel a sold-out show after branding her a “devil worshipper.”

In 2002, Bali was the site of suicide bombings that killed 202 people, mostly foreign tourists. Since then, the government has aggressively pursued militant groups, which in recent years have committed much smaller-scale attacks mainly focused on security personnel.

Interestingly Miss World went on to say that she aspired going forward to just be herself educate and share what she knows with the world going forward in the next 12 months.