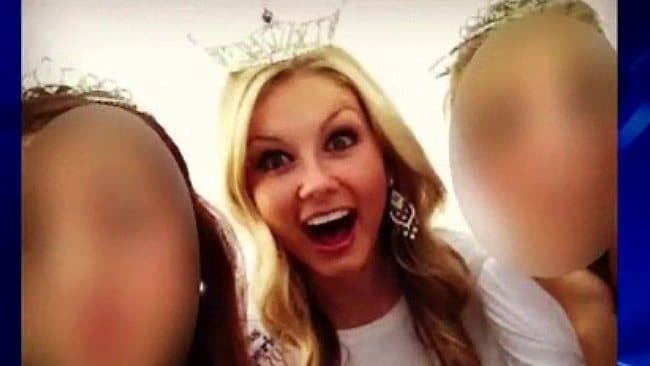 The charges comes after after the Utah beauty queen and three accomplices were arrested last weekend driving around local neighborhoods purportedly tossing bottles filled with caustic chemicals at people they knew. At the time the 18 year old along with her mates went on to say they were just having a lark but tell that to authorities who have gone and taken it all too seriously.

Told prosecutor Blake Nakamura who is lobbying for felony charges:

“We don’t really understand a clear reason for their behavior. The reason we charged them is obviously, what they possessed was indeed explosives, and we’re alleging they were throwing them near homes and at people, and therefore, had the potential to cause a great deal of harm.”

The charges come after the Utah beauty queen was recently crowned Miss Riverton, topping a slate of nine beauty contestants earlier this summer in the Salt Lake City suburb.

At the time of her showing, Gill showed off years of piano training with a Scott Joplin number and took home a $2,000 scholarship.

Coming along for the messy court ride include John Patrick Reagh, Shanna Marie Smith and Bryce Christopher Stone, who are now sequestrated to appear in court on August 26 in Salt Lake City.

Local press went on to tell that at the time of the ‘prank’ no one sustained injury.

The nypost goes on to note that it is not at present clear if the Utah beauty queen’s prospects for moving up in future beauty competitions, or whether for that matter her title will be revoked.

Because sometimes beauty is only skin deep…