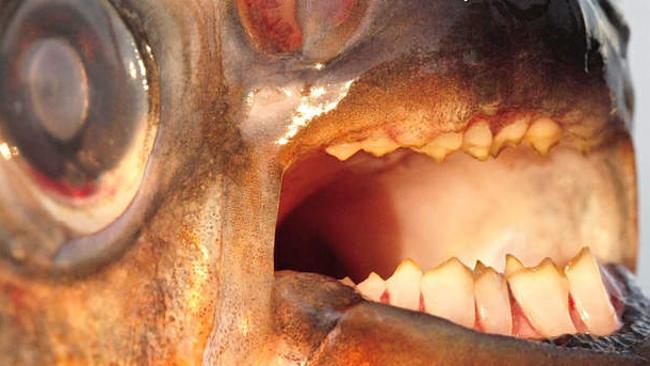 Scandinavian male swimmers are said to have a new concern to contend with. That of a testicle-attacking monster fish. The assertion comes after fisherman in the Oresund Sound between Sweden and Denmark went on to reel in a pacu, a fish best known for its sharp teeth and occasional attacks on male genitalia.

Reflected Henrik Carl, an expert at the Natural Museum of Denmark:

“The pacu is not normally dangerous to people but it has quite a serious bite. There have been incidents in other countries, such as Papua New Guinea, where some men have had their testicles bitten off. They bite because they’re hungry, and testicles sit nicely in their mouth.”

Amongst other things one imagines…

Went on explain Carl, in noting that the pacu’s diet does not normally include testicles: “Its mouth is not so big, so of course it normally eats nuts, fruit, and small fish, but human testicles are just a natural target.”

According to Carl, the pacu is nearly indistinguishable from the piranha, except in one way: its teeth are “flatter and stronger [than the piranha’s], perfect for crushing.”

It is believed the fish, which is usually found in the Amazon river, was likely dumped into Scandinavian waters by an amateur fish collector, according to the museum.

Nevertheless Scandinavian male swimmers have gone on to ask how they may protect themselves in the event of an attack:

Told Carl: “Keep your swimsuit on in the Sound these days – maybe there are few more out there. It’s not normal to get your testicles bitten off, of course, but it can happen, especially now in Sweden.”

The UK’s telegraph goes on to note the legitimacy of the pacu’s bite when it points out that in areas where pacus proliferate, fishermen have reportedly bled to death after losing their testicles to the fish’s crushing jaws.

Then again it just might be no coincidence that locals have gone on to call the pacu “The Ball Cutter.”