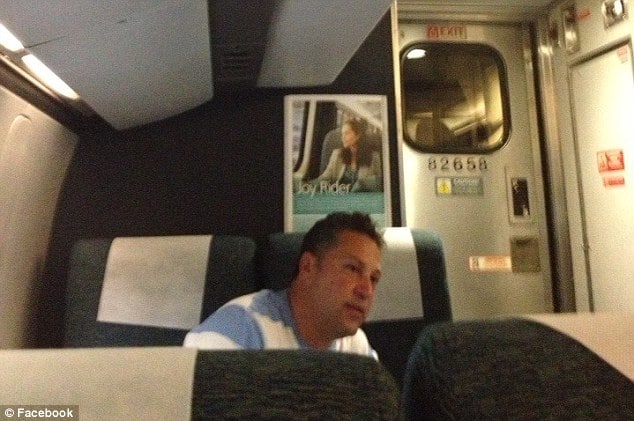 Making news is the individual in the above photo who may or may not know he’s been slammed around the world on Facebook.

It all came about after a fellow passenger by the name of Steph Strayer had the interesting pleasure (for a lack of a better word) of spending a two hour train ride listening to the above man openly bragging about his affairs. To say that the man’s feats didn’t go down too well with Steph would be an understatement.

Naturally Steph took to taking a picture of the above individual before posting it on her Facebook page hoping it will find its way to his wife.

Wrote Steph: “If this is your husband, I have endured a two hour train ride from Philadelphia listening to this loser and his friends brag about their multiple affairs and how their wives are too stupid to catch on. Oh please repost …”

News.com.au contacted Steph but have yet to hear back from her.

To date it can not be confirmed whether the above man did or did not actually have an affair or boast about it to his friends or whether on some level he was being singled out by Steph because she has a problem with men’s conduct. Of course one is inclined to wonder how this would have all gone down had the genders been reversed?

In the end it may just that Steph just wanted to punish the man for something else or simply because he was a man and as we all know men are sleazy creatures who unlike women cheat, lie and sleep with who ever they can possibly can with. Right? At least that’s maybe what Steph and other women like her may be thinking?

Who knows it could all well be that the man is completely innocent, or his comments were taken out of context?

Or it could be that Steph is a nosy woman who had no business going out of her way attempting to humiliate a man who never did anything directly to her, then again sometimes sisterhood understands no boundaries.

Needless to say, the man in the above man has received a thorough dredging on Facebook. It may well be he’s in for a very big shock when he receives his marching orders when or if his wife finds out. Not that Steph would be too upset if it all came to be.

The post has since opened up the debate about whether it is right to publicly shame a stranger on social media, not that that would necessarily stop some of you.

What do you think kids, do you think Steph has been on the receiving end of a man who strayed….? Haven’t we all been on the receiving end of a partner who strayed…and why the rush to publicly condemn a man because we may or may not agree with his moral choices? Is that to suggest that men should be held to a higher moral standard than women? Or is it the other way round?

And there were these comments I came across on the web that made me wonder:

I reject her behavior completely, I do not think this is something we should do to each other. To hand out instant consequences to a stranger for his perceived sexual conduct. Eerie. Creepy.

Maybe they had some other sort of argument and this was her retaliation. Or maybe he really is a cheating, bragging terrible person. But there is no way for the vast majority of people who will see an internet based shaming to know whether it is true or not. Even before the internet “public shaming” didn’t exactly have the best track record – often people are shamed for things they actually did do, and that’s great and just in many cases, but people are also often shamed for things they didn’t do, or for things they shouldn’t actually be ashamed of. This sort of large scale sharing ability magnifies both aspects of it, not just the good part.

Wow. I do not agree with cheating on any level; however, it is not a STRANGER’S job to post the picture of a man she doesn’t know to inform a woman she doesn’t know of an alleged affair. Did he cheat? He might have. But he might have also been playing along with his buddies so that he doesn’t look like the odd man out of a group of people who think affairs are cool. Or maybe he does cheat, but the wife is aware of it… but maybe her friends don’t. Way to ruin multiple people’s lives from overhearing one conversation on a train.