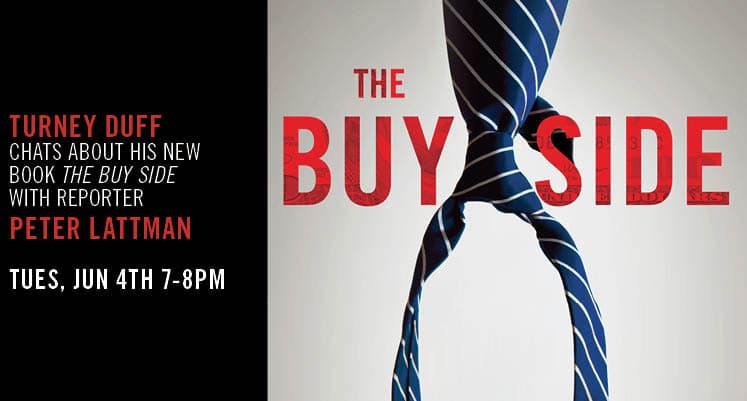 As a former wall street buy side trader and market maker I can personally attest that what Turney Duff writes about in his compelling memoir is pretty close to the truth. That money, sex, power and drugs go a long way in giving young men bundles of courage to live the type of lifestyle that many of us dream about until of course the fizzle eventually envelops us and causes us to wonder what it’s all about.

Such is the case in Turney Duff’s adroit memoir, “The Buy Side: A Wall Street Trader’s Tale of Spectacular Excess,”in which he waxes about his time at hedge fund Argus Partners in the early 2000’s.

Duff does a good job of breaking down the misery because it is misery to turn up to an office with millions of dollars to play with (and that’s the way most wall street traders see it as-a game) with your head throbbing, your nose oozing blood from last night’s excesses and your designer suit reeking of cigarettes and the fine lint scars of the desolate creatures one meets at an assortment of after hours or what not.

Writes Turney Duff in one passage:

The trading desk is surrounded by glass. I work in a fish bowl. I’m in the middle of a newly renovated office on Park Avenue . . . As the opening bell rings, every muscle in my body clenches. I sit upright and try to focus on the eight computer screens in front of me. There are 25 orders on my desk, each from five to 10 million dollars and involving some sort of investment decision. My head throbs.

If I can just make it to lunch, I tell myself. A cheeseburger with a fried egg will help. I try to see how many minutes I can go without looking at the clock — 16 is the record for the day. I can’t keep my eyes open. I just need to make it to the closing bell.

But that ought not to have bothered chaps like Duff who are a kind of superhuman being designed to weather such self infliction and simply shrug stuff like that off as they go proving to themselves and the world how much better they really are than everybody else. And usually that stuff works until some time long after the self deception finally causes one to break down and wonder ‘who was I really trying to fool, buy, outbid, outperform?‘ In the end no one cares because like trading itself it’s a clever game of abstract notions that one can rearrange at pleasure, assuming of course one still has the ability and the stamina to keep making the easy money.

Duff goes on to reveal the privileges an office of a buy side trader can attain: hookers, mounds and ounces of coke, private jets, floor seats, limousines and any party your ass feels like turning up to tonight. You have the money, you have the power and everyone just wants a slice of it because that’s what makes the world go round.

In the end one wonders what the allure of trading is really all about, the high of making money, the high of all the power reserved for so few, the high of feeling always invincible or the high of not having to deal with your own limitations and using all that money you suddenly come across to shield yourself from the bitter feeling that deep down you’re just as lonely, scared and vulnerable as the rest of them, except for a lot more money that you think you can buy yourself out of the real you.

Reflects tradersmagazine: Is there a moral here? Maybe. But Duff doesn’t blame his problems on Wall Street or having too much money too soon. Over 20 million Americans suffer from drug and alcohol addiction. This ex-buyside trader just happens to be one of them.

For the casual reader, the book is the story of a rich, young Wall Streeter who flew too close to the sun. For the trading

pro, the value of the book is the peek he gets into the buyside-sellside relationship.

Is there a moral? That even traders are human beings who can’t help using money the way a junkie can’t help priming up another needle because deep down they’re dealing with their mortality and the dizzy high of being able to get away with dealing with themselves and the knowledge that it can all so easily flop away.