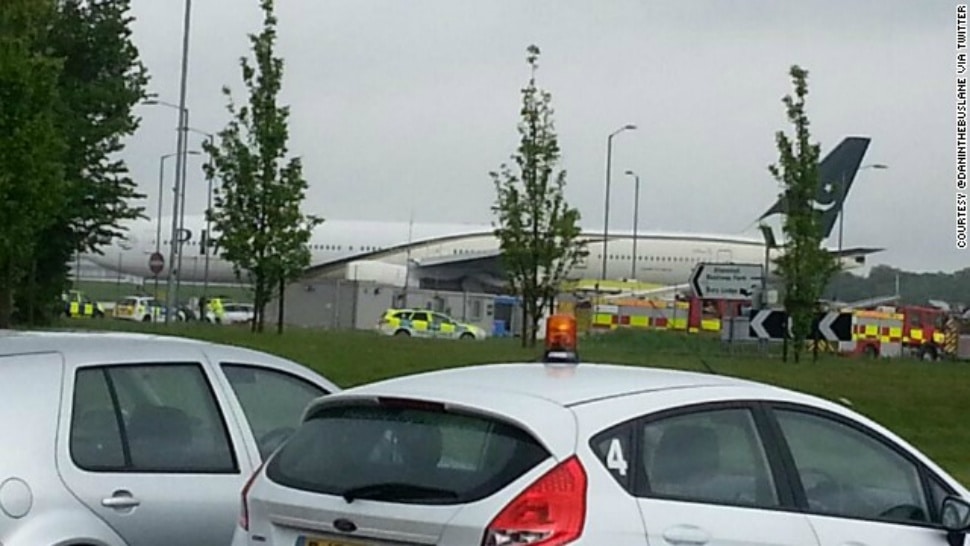 A Pakistan International Airlines flight bound from Pakistan to Britain today had to have two fighter planes escort it to ground after two British nationals attempted to repeatedly enter the plane’s cockpit with just ten minutes before the plane was destined to land.

The incident is said to have happened on board Pakistan International Airlines flight PK709 which at the time was carrying 297 passengers from Lahore, Pakistan bound for the UK’s Manchester. The incident led to the airline being accompanied by two Royal Airforce fighter planes which escorted the plane to ground at nearby Stansted Airport.

At present it is not known whether the two men were conspiring to cause terrorism but the incident is thought to have come about after a scuffle amongst passengers ensued.

Told a police spokesperson: ‘Essex Police have boarded a passenger plane diverted to Stansted Airport and two men have been arrested on suspicion of endangerment of an aircraft. They have been removed from the plane.’

A Pakistani official briefed by British police and PIA security on the investigation said the two suspects, speaking Urdu, allegedly threatened to “destroy the plane” after an argument with crew. The official spoke on condition of anonymity because he was not authorized to speak about the case on the record.

Pakistan International Airlines spokesman Mashood Tajwar went on to tell that the airline had been unable to contact the pilot of the flight despite repeated attempts to do so.

The two men involved were immediately arrested after the plane came to a halt with fellow passengers disembarking soon after.

Prior to passengers being told to disembark the plane (without their belongings) helicopters are said to have flown above the aircraft with police officers rushing to the plane to apprehend said individuals as well as inspect the plane’s contents.

‘They were then removed from the plane and taken to waiting police vehicles before onward transport to a police station where they will remain in custody pending interview by detectives.

‘The rest of the passengers have been allowed to disembark the plane under police escort. They have been placed on airport coaches and have been taken to the terminal building for debriefing.

‘The plane will remain at its current location and will be subject to forensic examination by specialist officers.

‘At this point in time no suspicious items have been recovered.

‘This incident is being treated as a criminal offence and remains under the direction of Essex Police.’

At present the disturbance has not been classified as an act of terrorism but it does come off the back of a recent spate of terror attacks in Pakistan after recent presidential elections as well as the beheading of a London soldier at the hands of Islamic extremist Michael Adebolajo. It is not known at present if any correlation exists between these events, although it is understood today’s tensions have once again exacerbated tensions in the UK with respect to Islamic notions.