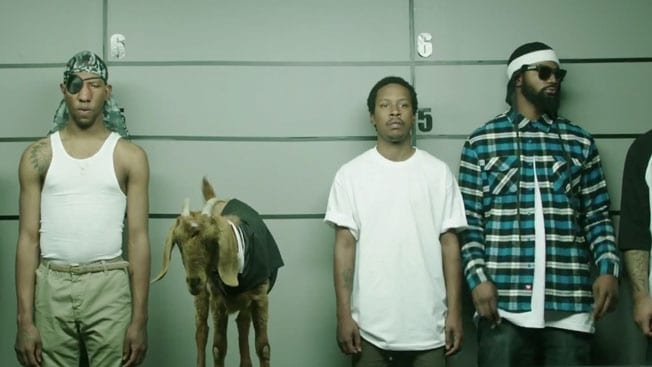 Mountain Dew the beverage maker has finally opted to pull out its latest campaign after it received wide condemnation for what many perceived to be its racist and misogynistic tones. The fact that it may have all been with a wink and a sly smile did little to appease many’s concern that Mountain Dew wasn’t really taking the piss out of society mores but rather enforcing them. That is enforcing the idea that black men are criminals and women are helpless battered creatures who ought to know to keep their mouths shut.

hollywoodreporter: The minute-long commercial features five members of the hip-hop collective Odd Future as suspects in a line-up that also includes a talking goat named Felicia (voiced by the group’s ringleader, the rapper-producer Tyler the Creator). A battered and bloodied woman — sporting a neck brace and crutches — wails with fear as Felicia threatens her from behind the mirrored window. “Keep your mouth shut. I’m gonna get outta here and I’m gonna ‘dew’ you up,” bullies the goat, prompting the woman to run away. Meanwhile, a jaded cop guzzles a bottle of Mountain Dew.

What’s probably most interesting about the three part series commercials is that they are were all made by a black man, rapper producer Tyler the Creator who some would have thought would have gone out of his way to distance himself from some nasty stereotypes that exist in the community. Yet interestingly Tyler chose to play into them because perhaps in some way as politically incorrect it is to reference a certain segment of the population in disparaging terms, such stereotypes and dispositions actually exist (just read the tabloids) even if many of us ‘white’ folks are shocked to find out that they do. Or rather feel suddenly embarrassed and overwhelmed that such countenances could be embraced by a segment of society that we should all be feeling slighted for. Yes we ‘white’ folk are mad guilty right?

Told a representative for Mountain Dew distributor PepsiCo:  “We apologize for this video and take full responsibility. “We have removed it from all Mountain Dew channels and Tyler is removing it from his channels as well.”

A rep for Tyler the Creator, whose raps have drawn criticism for being homophobic and misogynistic released this statement to THR:

“It was never Tyler’s intention to offend however, offense is personal and valid to anyone who is offended. Out of respect to those that were offended the ad was taken down,” it said. “For those who know and respect Tyler he is known for pushing boundaries and challenging stereotypes through humor. This is someone who grew up on David Chappelle. This situation is layered with context and is a discussion that Tyler would love to address in the right forum as he does have a point of view.”

“Contrary to what many may discern from this Tyler is the embodiment of not judging others, his delivery may not be for everyone (which is true for anyone who pushes boundaries) but his voice is nonetheless important to the conversation since his demographic understands what he ultimately stands for and sees the irony of it all,” continued the statement.

“He absolutely never intended to spark a controversy about race,” it read. “It was simply an again admittedly absurd story that was never meant to be taken seriously. Again we apologize if this was taken out of context and would never trivialize racism, especially now in America where voting and civil rights are being challenged at the highest level.”

This country needs to stop crying over being insensitive and just view the people in the skit as people and not black and white. The racist people are the ones that complain, not the ones that don’t see it as being racist. Racism will never go away as long as people complain about everything that shows any culture in a negative light because obviously this was made for comedic reasons not to be hateful. The response is the problem in this country not the actual ad!

Tyler African-American rapper, Isn’t rapper who put on their videos women degrading themselves,videos in witch is thought that respect is not earn but force by violence, that you must carry a gun, and have a tough attitude…..The only thing wrong with the video is that they should have put 5 black,2 latinos, and 1 one, that is the correct ratio! after that even the goat deserves to be there……..
Art can be uncomfortable (and there’s no reason commercial speech can’t be art, or uncomfortable) but it’s a subjective thing, open to interpretation by the viewer. And firing up the outrage machine against art in order to stifle it closes it to interpretation and imposes one person’s discomfort as the overriding take-away.
SHARE
Facebook
Twitter