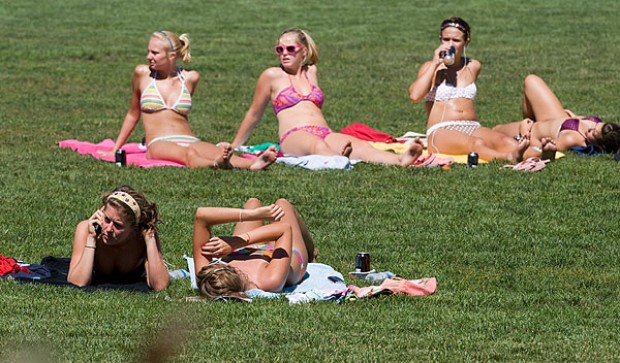 Making headlines in the land of the discontented and the quest for proper manners is the bitter feud that has erupted amongst residents of Manhattan’s Stuyvesant town, a well to do enclave and those who dare to sunbathe in a local playground.

According to some local parents the recent abundance of scantily clad sunbathers has effectively pushed the boundaries of what makes for proper decorum.

‘….the sunbathers have effectively pushed out the kids who wanted access to that playground,’

‘What was more absurd is that yesterday was on the chilly side, making these self-entitled yahoos look very stupid indeed. This playground should NOT be used for playground.

‘We’ve heard that complaints were made, and now it’s time for management to.. show some balls. Think of the children!’

Yet the students who live amongt them think their fellow residents are simply being too self precocious.

”A body’s a body, and they need to get over themselves,’

‘I pay just as much rent as they do. Just because I don’t have a child doesn’t mean I shouldn’t be able to be here.’

Which is to say Katie may indeed have a point especially if one is paying the going rate of $3555 (for a one bedroom apartment) to live in the well to do enclave. Bearing in mind Katie may be one of the many students the development has been aggressively advertising to come and move into the private enclave in the first place.

Nevertheless some tenants are not taking it in stride, point in case, Susan Steinberg, the head of the tenants association who is demanding two piece bathing suits be outlawed.

‘This used to be a very strait-laced community,’ tells Susan Steinberg to  the NY Post. ‘The sunbathing is tasteless, it’s not very classy, and it doesn’t belong in a mixed residential development.’

But then again define classy and tasteful?

Kids what do you think? Is Susan being a bit of a terrorist or should the students who have flocked to the enclave be allowed to enjoy the field as they see fit bearing in mind that a touch of decorum may in the end go a long way?

Then again what is it about side boobs that makes some of us uncomfortable in the first place…?