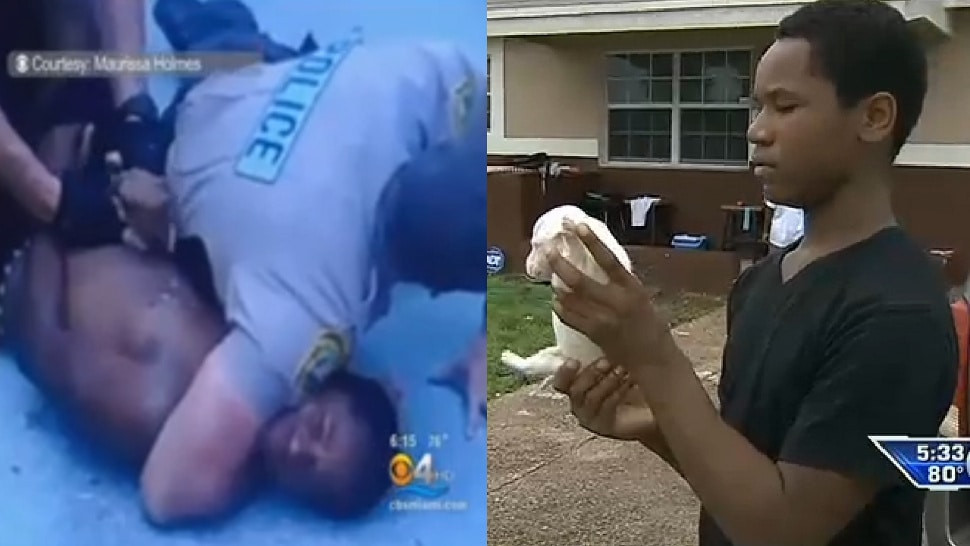 Cops in Miami have today gone on to tell that they had no choice but to physically restrain a 14 year old boy who was playing on the beach with another teen in the water when he was approached by Miami-Dade Police officers and ordered to stop fighting.

At the time Tremaine McMillian was roughhousing with another teen in the water when he was approached by Miami-Dade Police officers who ordered them to stop fighting.

Despite realizing that no actual fighting was taking place, the officers still asked McMillian to point out his mother to them.

Tremaine says he complied, but Miami-Dade Police Detective Alvaro Zabaleta claims the boy refused to cooperate and tried to walk away.

“When he started to leave the beach area, officers had to get off their ATVs to detain him. He had closed arms, clenched fists and pulled his arm away,” Zabaleta told CBS Miami.

Sensing a imminent “threat” from Tremaine’s body language and “dehumanizing stares,” the officers placed the teen in a chokehold.

Told Tremaine McMillian in a juvenile court: “He started choking me, and as he was choking me, I urinated on myself because I couldn’t breathe.”

According to the police report, officers said McMillian got combative and clenched his fist. Police wrote, “He attempted to pull his arm away, stating, ‘Man, don’t touch me like I did something.'”

Tremaine for his part has gone on to assert that  it would have been impossible for him to be clenching his fists because he was holding his six-week-old pit bull mix puppy Polo at the time and feeding him with a bottle.

He says the puppy was injured when police slammed him on the ground.

McMillian’s sister, Kearra McMillian went on to offer the following: “My brother did nothing wrong. He didn’t say anything to the officer. He just kept walking. I guess they just got mad because he wouldn’t stop.”

Police went on to book Tremaine on a felony charge of resisting arrest with violence as well as misdemeanor charge of disorderly conduct.

A public defender’s request to have the charges reconsidered was denied by a Juvenile Justice Center judge, and his trial has been scheduled for July 16th.