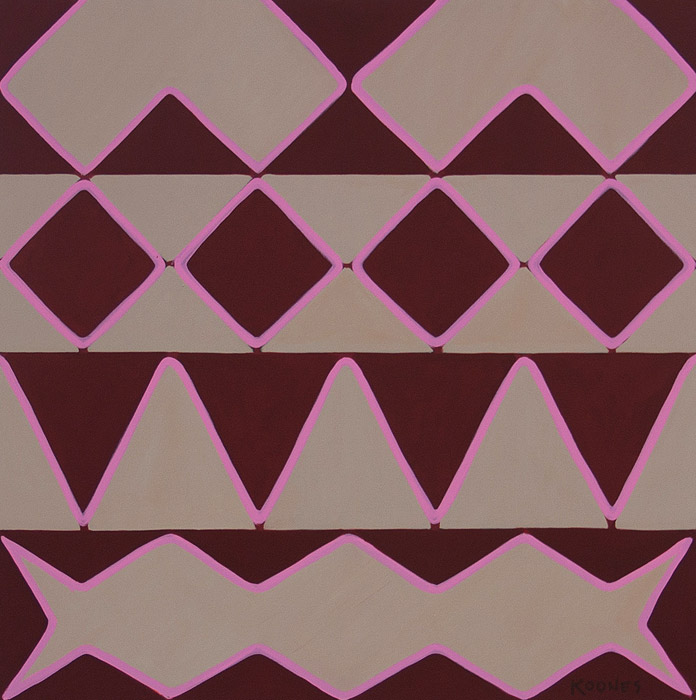 I’m sitting across the turf from artist Jon Koones, studying the deep furrows of the man who can be best described as his own best self taught artist (he has never attended art school).

He quietly fidgets as he takes from swapping one hand to the other. Hands that he has used these last 20 years to rebuild houses but hands he has used one suspects to rebuild his sense of perspective and identity of being as he has swapped from his foray into abstract painting and that of large bronze sculptures.

SCV: You made a statement recently that caught my attention. ‘What started out as an experiment in frustration eventually lead to feelings of great satisfaction.’ Can you please explain further?

JK: I’ve always been curious about the idea of getting to the essence of something. What anything really means and how one arrives at that meaning. Practically speaking it’s a process of chipping away at it, honing on the repetitive process of function, lines, space and eventually the consciousness one arrives at.

Looking at Jon Koones’ art one arrives at the idea that the man indeed strives for consciousness but one that is indefinable and yet lucid and ultimately a subjective one where one takes away their own interpretations and meaning.

What’s interesting about Jon Koones is lack of ego. He simply has no time for it and frankly admits he has never understood why an artist would invest in such an attitude.

‘I’m a working man and that’s it where it is for me. I’m not looking for gimmicks. I’m just trying to understand essence. In fact the whole idea of plodding along is to strip oneself of their ego, apprehensions and expectations and to attempt to arrive at a simple idea of the present and what that may mean for oneself. I think we so often forget about that as we go about our responsibilities and I think it’s very important to be conscious of that. ‘

SCV: Do you see your work as controversial?

JK:  In some parts of the world, sadly.  But not at all, my work expresses some thought, right now the thought of love. What is controversial about that?

SCV: Your sculptures in some way depart from your paintings but one senses a repetitive theme of delving through one’s consciousness as you cut to base shapes, lines and flowing darting in and out of space.

JK: I basically just started making 3 dimensional art, so over all it might be seen as a departure, but it is a direct parallel to what I am doing on canvas right now. I have actually brought a sculpture quality to my most resent paintings. I very much look forward to revisiting many of my past painted images and bringing them into the 3 dimensional world.

SCV: What inspires you?

JK:  The possibilities of what is next, as well as finishing what ever I am working on. I’m not interested in cliches, hyperbole, the sensational, rather organic forms and how the process of cutting to the chase can so often reveal more to oneself than any over the top statement ever could.

SCV: Describe the inspiration behind the ‘Love shape’ sculptures.

JK:  It started as an experimental piece of work that I have repeated over and over in different forms and materials. Like the emotion of love it continues to expand. Let it be seen in many places in many forms. I want love to take me were I am going. To literally be working on love is inspirational just in itself. To spread the message of love feels special.

SCV: What’s next for Jon Koones?

JK: I have been working on a number of paintings that where inspired by the entrance to “The Treasury Monument” at Petra, Jordan. I kind have got side tracked with all this love.

JK:  Love is an expansive emotion that cannot be defined. I will say that love takes place when we share with ourselves and others the acts of kindness.