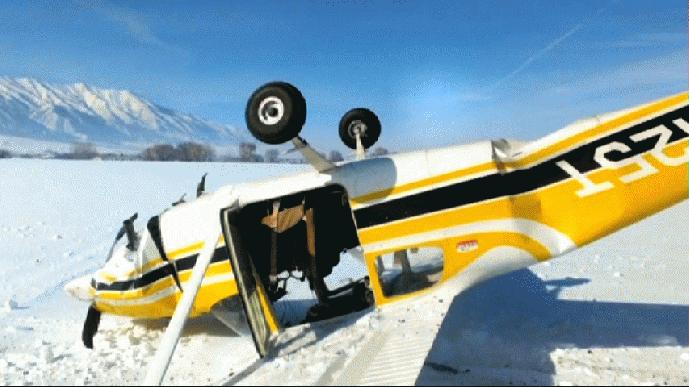 Here comes a video that might make you wonder what the meaning of life is really all about.

It comes courtesy of youtube user Jonathan Fielding who was on a flight over Utah with his wife Kara, her mother and his seven-month old son, Jacob, earlier this month. The flight was a birthday gift for Kara, a first time flyer.

After receiving news that the plane’s carburetor had iced over and the pilot was preparing to make a crash landing, Jonathan grabbed his cellphone and started filming.

Tells policymic: On the YouTube video, Jonathan writes in the description section that when they first heard the news from the pilot:

My [Jonathan’s] initial reaction was shock and fear. There was an incredible feeling of calm and peace with swept over all of us as we all said our own silent prayers in our heart. It was in that moment as I tried to recall any sort of ill or uneasy feeling before the flight, any kind of ‘warning’ feelings that I get sometimes to warn me away from when something really bad was going to happen, you know that ‘inner feeling’. After I realized that I never once got a bad feeling of warning I knew in that moment that we were going to be ok. I knew that God was watching over us and protecting my family. We belong to The Church of Jesus Christ of Latter-Day Saints and we’ve been taught to listen to those feelings because they are sent from God.

In the end everyone survived the crash unscathed as the plane landed upside down but safe. The only tragedy it seems was the pilot forgot to renew his insurance policy which had coincidentally lapsed just 13 hours earlier, which set the pilot back a cool $40 000. Then again a whole lot more could have been lost too.

So how are you going to react next time impending death comes your way?

Check the video out below and wonder…