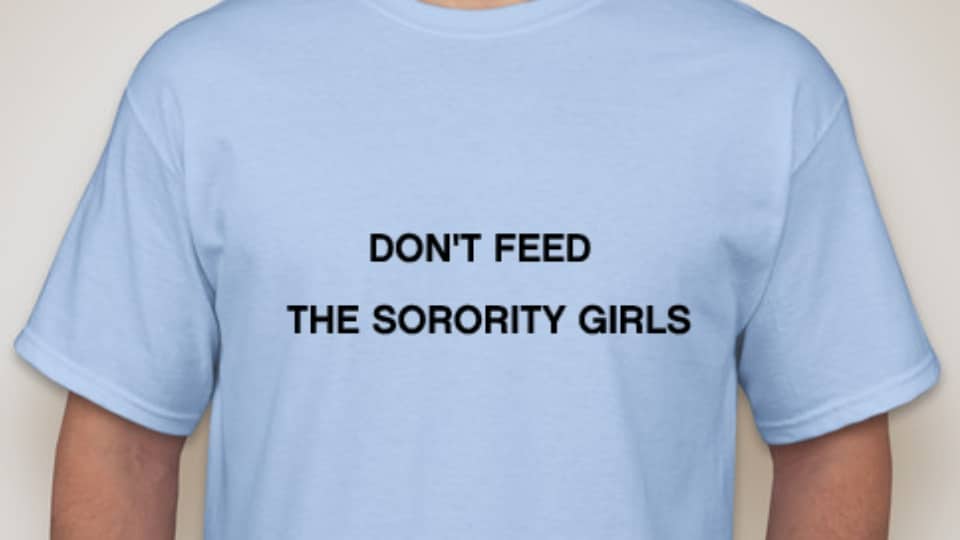 So what do i really mean when one chooses to wear a t shirt with the bold headline ‘Don’t feed the sorority girls,’ on college campus?

Should one be concerned that females are being objectified, negated, ridiculed or should one just smile and light heartedly walk away thinking nothing too much about it?

jezebel: Kendra Lee, a second-year student at AU’s Washington College of Law, saw a dude wearing one at the gym recently and wrote a thoughtful op-ed for The Eagle explaining why it’s not funny to be a walking billboard for objectifying women. Lee, who is recovering from an eating disorder, wrote that she still struggles every day not to tell herself she doesn’t deserve to eat and that weightlifting is the only way she can get out of her head and feel strong:

But now I don’t feel safe or wanted in the fitness center. I chose to go to AU because of its culture of public service and activism; a large student organization advocating the most lethal mental illness to girls for the sake of “campus beautification” is objectifying, misogynistic, even violent. It’s not as if it was just one random guy in a gross shirt; someone in his fraternity came up with the shirt, and enough “bros” wanted it that the frat ordered it and stamped its letters on it and its members wear it to the gym. It’s indicative of an unsafe culture, where sorority sisters are worth little more than the cute donkeys and elephants dotting the campus. We’re just here for aesthetics, but only as long as we’re starving.

I don’t think it’s too much to ask that students try not to trigger their classmates’ eating disorders, especially at the fitness center. A dress code at the gym that includes a ban on offensive and potentially triggering items would be a great step. Other universities, including Harvard, Queens College, St. John’s College and Kalamazoo College, have designated a few hours each week where the gym is women-only, and that would be even better.

But for now, I only ask that my classmates be sensitive to the ways they present themselves, and how they make others feel. They may be driving more women away from the gym, which seems to be the opposite of their tasteless, insulting point.

Kids I have to first say that I feel for Kendra Lee, it seems like she’s gone through her fair share of grief and all she wants is her sanity and the ability to live an existence where she does not feel her femininity is under constant attack, leached upon, negated or once again reminded why she nearly killed herself by becoming anorexic so she could approximate some male’s ideal sense of how she should look. Or is that really women’s sense of how they should look, perpetuated by women for women?

Then there’s the bitter reality that our society is overtly sexualized to begin with and that women are begin objectified every day from billboard and magazine covers to the way our advertisements are sold to us. The question ultimately depends on how does one respond to the climate of female objectification? Does one try to understand it, ignore it, be sensitive to it or just try to have a sensible view of the world and understand that as long as their actions don’t negate the rights of other human beings they’re close to doing fine. Right?

Or how about this?

...or maybe because our culture is obsessed with dictating what their bodies should look like?

The nature in which this article was written does not belong in any news outlet, it ought to be a “story of success” for an article discussing women battling eating disorders due to the author hijacking the story and converting it into a personal statement.

The author cites she does not “feel safe” at the gym due to the garment in question. I find her word choice to be in very poor taste, yet it seems to appear that her writing style is quite attention seeking. As a result of tragic events that have taken place across the country, one’s “safety” is now at an all-time high, however to insinuate that a slogan is “life-threatening” is overly dramatic.

The moral of the lesson? Free speech is all fine and dandy as long as you’re willing to accept responsibility for it, which poses the question does wearing such a shirt even though the university had originally banned it really negate or endanger a woman? Or is it the subtle insinuation that women can only be affirmed as long as they look a certain way, which might be like saying a dude is only datable material if only he drives a certain automobile or makes a certain amount of money, not that those type of t shirts exist, but we all know many of you women think that too.

So can we really punish someone for having a thought (assuming it’s not overtly sexist, homophobic, religious condemning, racial) even if one disagrees or is threatened/offended by it? Even if that thought is plastered on the front of their t shirt?