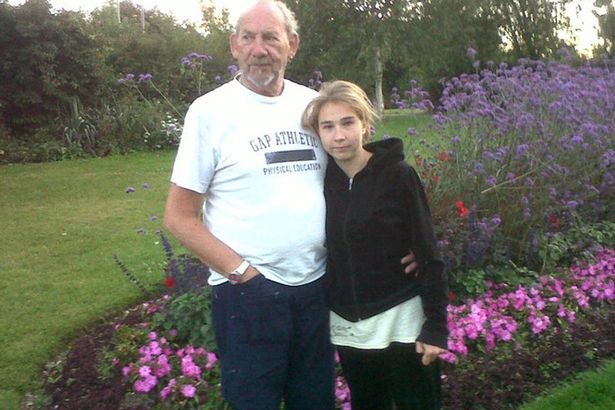 ‘She was just too much in the bedroom….’

70 year old pensioner Brian Sadler has caused his 21 year old girlfriend Kay Brooks to enter a state of despair after he decided that he could no longer keep up with his much younger girlfriend.

“Brian might be old and wrinkly but I still love him and I think he’s gorgeous. I’m absolutely heartbroken and can’t stop crying.

“At first he wouldn’t give me a straight answer or tell me why it was over but after some discussion, I think I can understand his reasoning.

“He said he wants me to meet ­someone closer to my own age and go on to have children with them but if he asked me to come back, I wouldn’t think twice.”

Tells Brian, who would rather Kay find a bloke closer to her own age:

“Age is catching up with me and I’m tired. I’m holding her back.

“I want to stay friends and I realise now she’s too young. We got on as she’s mature but it was hard to keep up with her in the bedroom.”

According to the UK’s mirror, Brian met his 21 year old lover when he was dating her aunt. That relationship eventually fizzled out and after corresponding via Facebook the two hit off and began seeing each other.

Tells Kay: “We got on like a house on fire and one night when we hugged goodnight it turned into a full-blown kiss.

“It gave me butterflies and at first I thought I was crazy. But after giving it some thought I realised that age is nothing but a number and I wanted to give it a go.”

Nevertheless it wasn’t all smooth sailing once Kay’s parents found out she was dating Brian who like most parents predictably took exception to the 50 year age difference.

“I moved in with Brian soon after that because I fell out with my aunt and my parents but I wasn’t prepared to give up on love. They’d have to choose – accept it or lose me.

“They eventually came round and Brian and I would spend special occasions like Christmas and New Year with them in Bournemouth.”

Adds Kay a former cleaner: “Brian was very sweet and gentle and would take me out for romantic meals to KFC or cook me a roast on Sunday.”

“We’d go to the movies or spend a night out in the pub. People thought he was my grandad but by the end I no longer cared what they thought.”

And then there was this surprise too when Brian one day asked Kay to marry him.

“I was gobsmacked. We were watching telly and he just came out with it. I had big plans but Brian told me we needed to save up some money first.”

But then suddenly things got nasty as time passed….

“I had lost my job and money was tight so we started arguing. Then he stopped being ­attentive and avoided eye contact. At one point he didn’t kiss me on the cheek.

“He told me he couldn’t carry on and I felt heartbroken. I haven’t stopped crying since. My family and friends think it’s for the best. There are plenty of boys that have asked me on dates but I am not ­interested. Brian is all I can think about.”

Which raises the question could it all have been about a father figure complex,a lack of self esteem, curiosity to experience love no matter the guise or the probability that Brian suddenly thought to himself he might be violating a young girl’s trust in him and the contempt of society?

Tell’s Kay’s 51 year old mother: “I am relieved it’s over. I hope she is able to move on and find someone closer in age.”