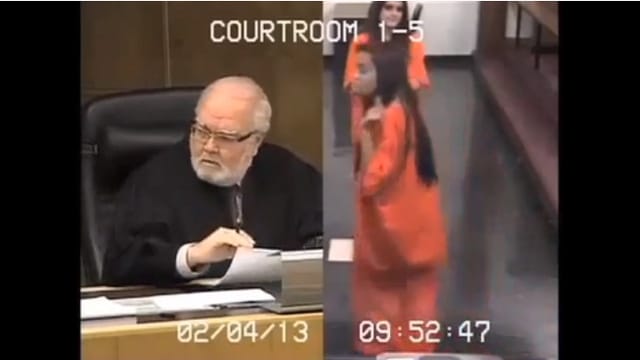 Penelope Soto has now found out why it does not pay to piss off Judge Jorge Rodriguez-Chomat.

18 year old Penelope Soto of Miami Dade county, Florida must have thought it was too funny when her ass was brought into court after she got caught with Xanax on her persons.

During sentencing deliberations Judge Jorge implored Penelope to put a lid on it when he told her, ‘Its not a joke, you known we’re not in a club now,’ after she started laughing out loud when Judge Jorge asked her about the value of her jewelry.

Cause of course that’s what any sensible defendant especially not on the good shit would say or react.

Recanted Penelope at the time: “I’m serious about it, you just made me laugh,” before adding that her jewelry was “worth a lot of money.”

When the judge again asked for a ballpark sum, Soto replied, “like Rick Ross.” Unfortunately that shit was lost on the judge, who asked Soto if she was on drugs.

“Actually, no,” she replied while repeatedly stroking her hair.

After the judge set Soto’s bond at $5,000, their exchange should have ended with Rodriguez-Chomat’s “bye bye.” But Soto’s flippant “adios” rubbed the judge the wrong way.

Tells gawker: He ordered her to return, and raised the bond by an additional $5,000. Soto was dismissed again, and again couldn’t bring herself to remain silent.

Before walking away, Soto pointed her middle finger toward the judge and said “fuck you.”

Kids you know what’s coming next don’t you?

Rodriguez-Chomat called her back one more time to confirm that she had indeed cursed at him and flipped him off, and sentenced her to 30 days in jail for contempt of court.

The moral of the lesson? Adios Judge Jorge isn’t polite bixch talk  but then again when you tell Judge Jorge to fuck himself then you’re really asking for some nasty shit to happen.

I see nothing wrong with the 30 day sentence for contempt, but raising bond by $5k just for saying “adios” was a really dick move, even if she was obviously high during the hearing.