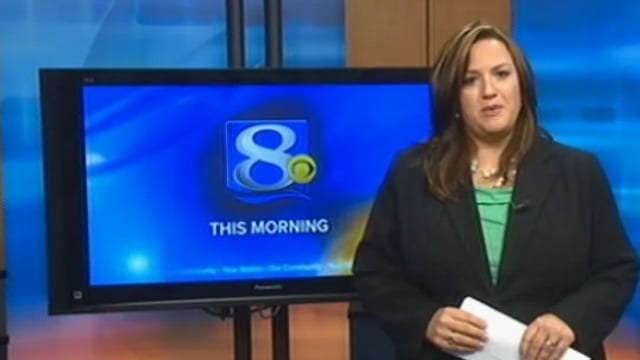 Video of Jennifer Livingston’s rebuke is below at bottom of page.

News anchor Jennifer Livingston this morning went live on air to respond to growing viewer dissent that she may just well be too fat for TV.

Wrote one viewer to the local station that Jennifer works for, Wisconsin’s CBS affiliate WKBT:

“a suitable example for this community’s young people, girls in particular,” by appearing on TV despite her being overweight.

The letter posted by Jennifer’s husband, Mike Thompson, himself a news anchor on his Facebook page incited him to react that he found the criticism levied at his wife ‘infuriating’ and ‘sick.’ 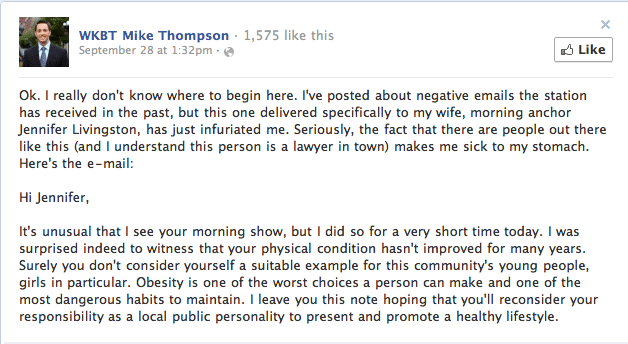 Responded Jennifer to the letter which by now had gone viral:

The truth is, I am overweight,” Livingston acknowledged. “You can call me fat – and yes, even obese on a doctor’s chart. But to the person who wrote me that letter, do you think I don’t know that? That your cruel words are pointing out something that I don’t see?”

‘You don’t know me. You are not a friend of mine. You are not a part of my family, and you have admitted you don’t watch this show. You know nothing about me but what you see on the outside, and I am much more than a number on a scale.’

There you go Jennifer, nothing like telling the world that you are more than the sum of your appearance. Then again we ought to thank the media for regularly adulating certain body forms over others, even if some of its own stars don’t approximate supposed acceptable virtues.

Then when it came time to reflect on whether she was a suitable role model for young people, Jennifer slam dunk the following:

To all of the children out there who feel lost, who are struggling with your weight, with the color of your skin, your sexual preference, your disability, even the acne on your face, listen to me right now. Do not let your self-worth be defined by bullies. Learn from my experience – that the cruel words of one are nothing compared to the shouts of many.

All of which may be very true but in a society fixated with how one looks and women subjecting themselves to inordinate amounts of stress as to how they look (cause us men only want them slim vixen types, right?) one has to wonder if Ms Livingston’s comments will register in the long run? That said, at least she got something off her chest and reminded us once again one is always more than how they look on the outside but so often who we are on the inside.

But then there was these comments that made me wonder as well:

He was hoping that she’d reconsider her habits and choose to lead a healthier lifestyle and set an example for the viewing public as a public figure. This could have been a great source of motivation for her to change her life, but instead she just chose to take the easy way out and rather than acting with dignity or even taking it as a wake up call, she chose to portray herself as a victim.

Would there have been such an uproar had the subject been a chain smoker or a heavy drinker instead?

Jennifer needs to be sent a message that is loud and clear, as does everyone else who may be apt to act as she does. What happened was not a case of bullying, and the fact that Jennifer tried to make it so shows her own willingness to manipulate others into allowing people such as herself to be selfish, unhealthy both mentally and physically. That is characteristic of people who choose not to take personal responsibility and instead place the burden on any other(s). Jennifer blamed her weight on having children and said that if she could snap her fingers and be healthier she would. What she was saying was that if it were really easy then she would consider it. What is unsaid is that she is unwilling to do the work to minimize the burden she places on the healthcare system as she ages, her children when she dies before she should, and all of the people who will now be enabled by her labeling what happened as bullying, rather than doing what is the right, or at a minimum the good thing to do. I have children and I am healthier than before, because my mentality is healthier than Jennifer’s. If anyone were to bully, it would be Jennifer, as she has done, because she doesn’t even have enough character to take care of herself, feel good about herself, or come from a place of responsibility and right thought. She likely doesn’t expect the best of her children and others, so be leery. We need people who change her way of thinking, and we Always need to be able to call on people who are being too selfish at the expense of others to step up in this country. If Jennifer had a realistic and healthy pattern of thought than she would publicly appreciate the letter that she received for what it was and encourage people to do what is going to make them feel the best possible about themselves, without laziness, selfishness, or manipulation-just be their best, rather than twisting the message in the letter. However, she wouldn’t do so, because it would be against her desires and goals. I worked out throughout all of my pregnancies, as I did before and after. It was no fun but boy are the results satisfying. I did it just as I face reality, easy or not. I eat well, am there for my loved ones as well as myself, and work in the healthcare field. I take great offense to Jennifer’s way of thinking and it has become too prevalent. I would react the same way to an alcoholic that cried bullying when being told what he or she needed to/should be told! We need to be careful how we respond to this, because everyone should not be getting a free pass whenever and however it serves them, or be allowed to create a twisted reality in order to do so.