Chadwick Bell was formed in 2007 by designer Chadwick Bell and business partner Vanessa Webster. In their program, Bell listed his inspiration for their spring collection as, “the bold shapes of the Southwest” and argues that the wearer “discovers enlightenment through themes of duality.” Pretty lofty claims for a clothing line, but the Studio was filled with promise as the audience waited in the scented room.

That’s right, scented. The Scent of Nirvana by 12.29 wafted through the room. The show was a complete sensory experience- in addition to the scented air, the lighting came from every unexpected angle, the air was dusty and hot, and the music, arranged by Stefan Campbell, was surreal. The effect was one of being transported in space and time.

But, as the first models filed out, I wondered if these sensory spectacles weren’t simply there to compensate for a subdued and neutral collection. Nude, white and black sheaths opened the show with understated tulle and leather details and I braced myself for another exercise in subtlety.

Then, either the perfume and the heat combined to induce chic-as-fuck hallucinations or things got much more interesting. Again I felt as though I was being transported in space and time, only I wasn’t sure which direction. It was like a 1950 socialite’s vision of the future of fashion. 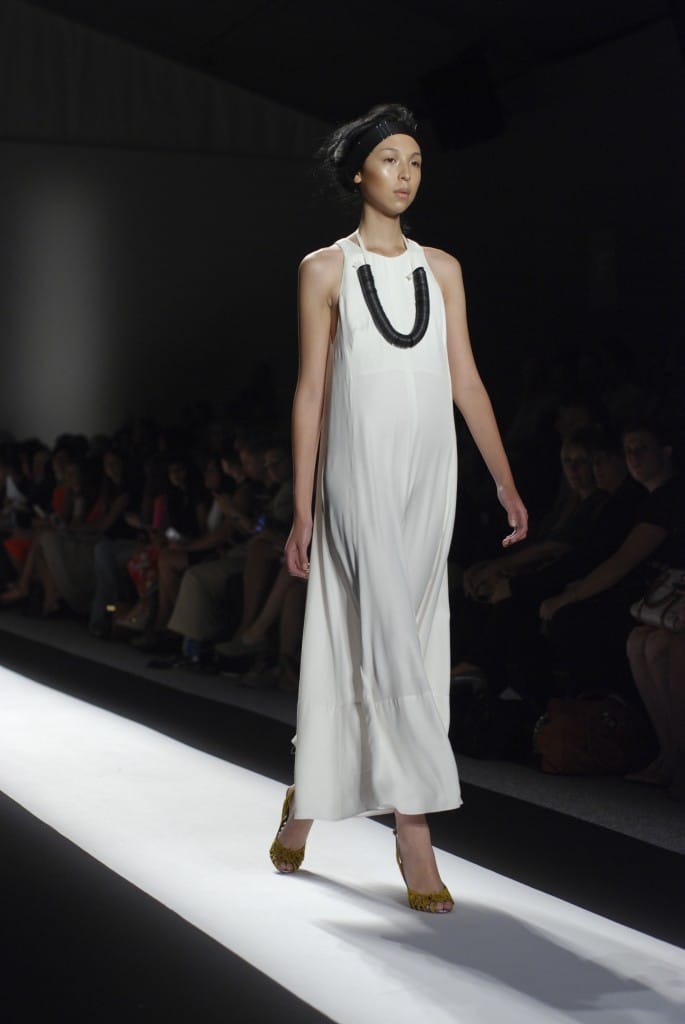 Classic 50s shapes like swing jackets and gauchos in palm frond lace that would look at home in an avocado colored kitchen in equally nostalgic colors like “aniline pink”, “malachite green” and stunning purples. The Southwestern influence manifested itself in black pottery adornments, that  edged various pieces, contributing to the vintage feel.

The Jetsons is a fitting TV comparison, because this retro kitsch was met by deconstructed, futuristic fashion: exposed zippers, mesh backed dresses and large, reinforced hems that were exposed by the ground level lighting. The models, whose eerily shiny faces made them look particularly alien, walked down the runway, then up and into the audience to walk back. That may sound simple, but any change to the standard back and forth of Fashion Week lends a futuristic edge to a show. You could practically hear the thought bubbles popping up above the coiffed heads: “what?! Models doing something other than walking back and forth on a plexiglass floor?! Madness!” 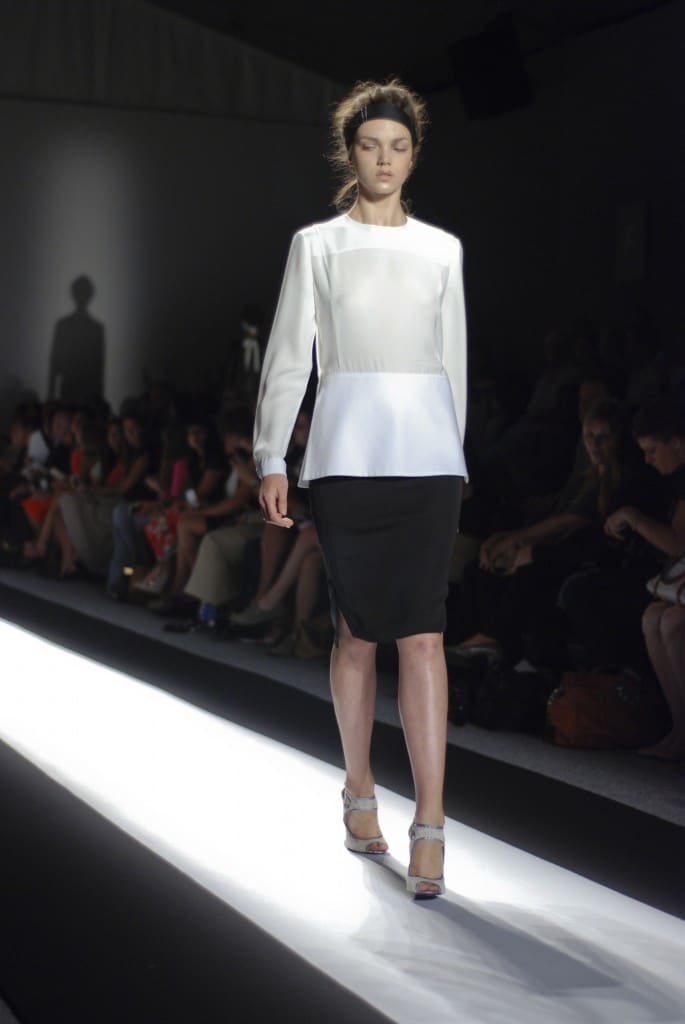 All of these details lent a fantastic space age yin to the retro tropicana yang. Despite my initial skepticism at the claims of the program, I really did experience a form of fashion enlightenment at the duality. The show closed with ethereal, floaty dresses brought back down to earth by side cutouts knotted together.

The contrasting nature of the show, unlike the American economy, even trickled down to the shoes: white summertime lace that reeked of Americana on top of a heel-less skyscraper with Rainbow Brite details.

I wonder how these pieces will translate to the street style blogs. Not because they aren’t wearable, but because the show was so cohesive that I can’t picture any of the components individually. Nevertheless, I feel sure I’ll be seeing this collection everywhere from the red carpet to the 5th Ave. walk of shame. And as I sincerely tip my hat to Chadwick Bell, I also sincerely wish it was one of his hats.

Photos of collection continue next page as well. 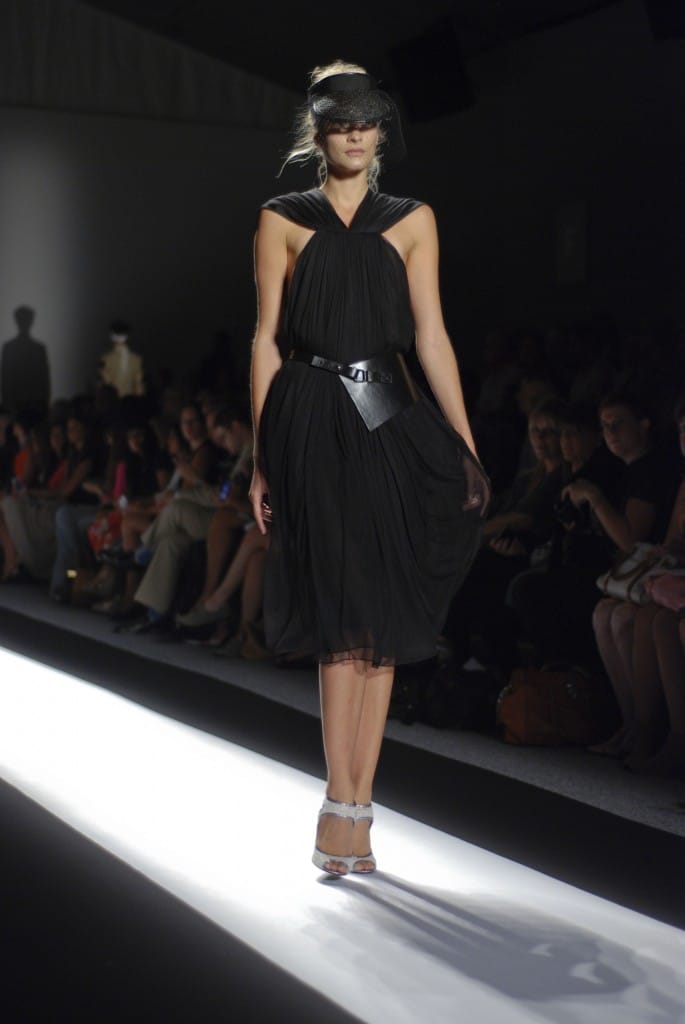 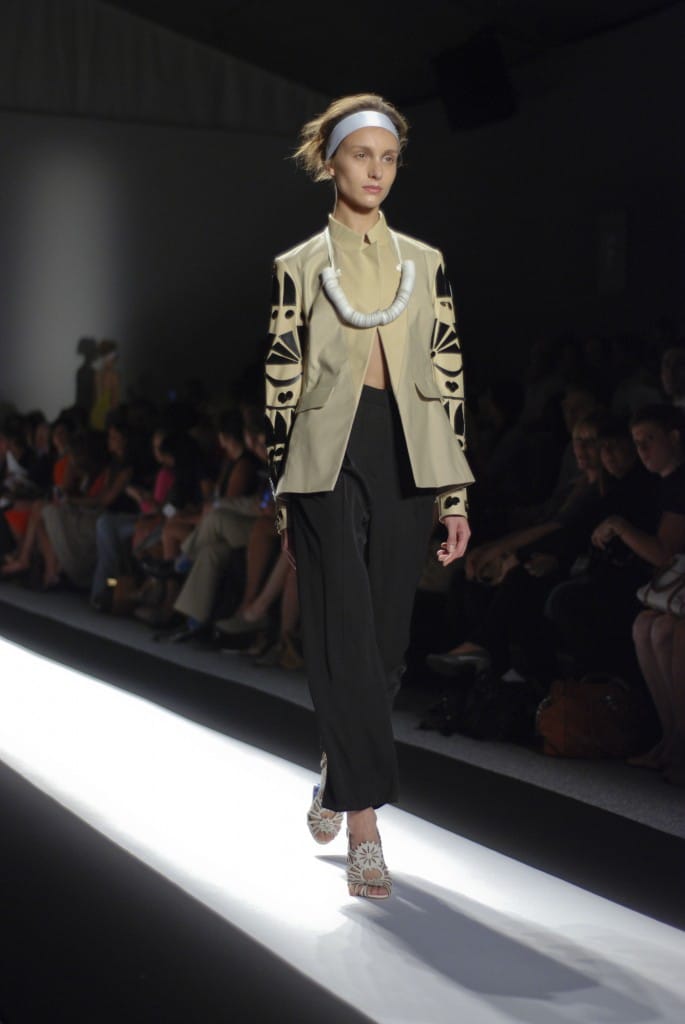 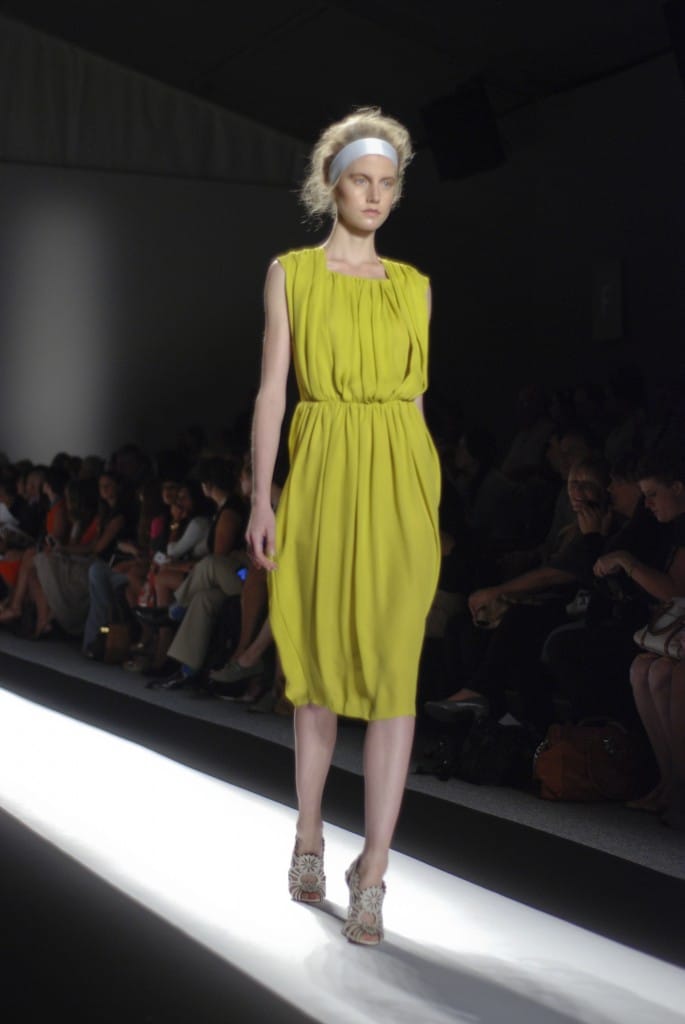 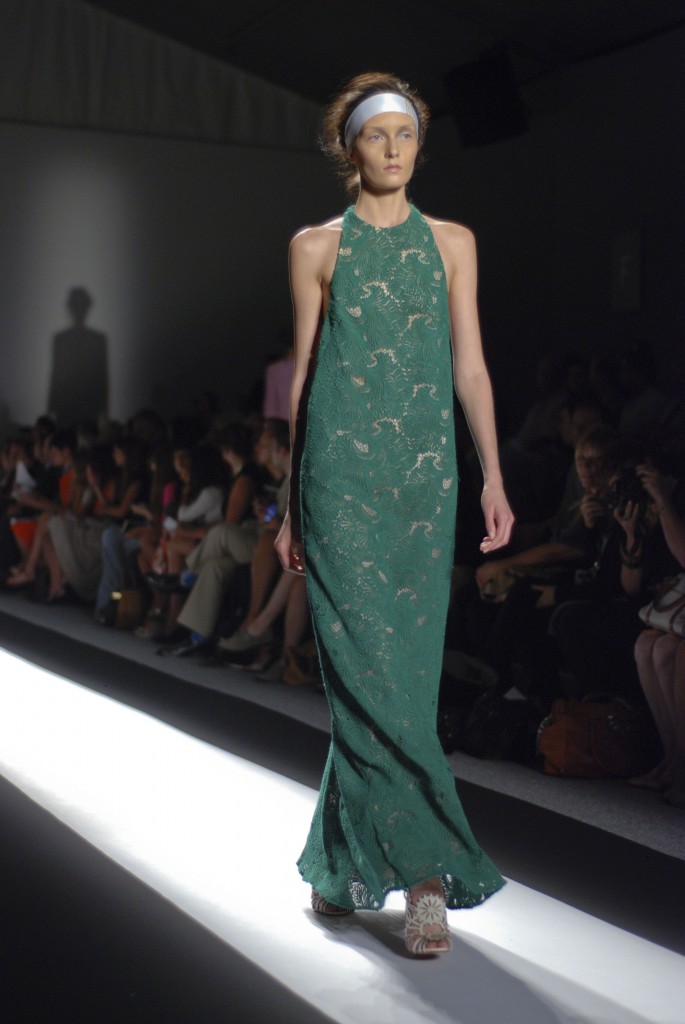