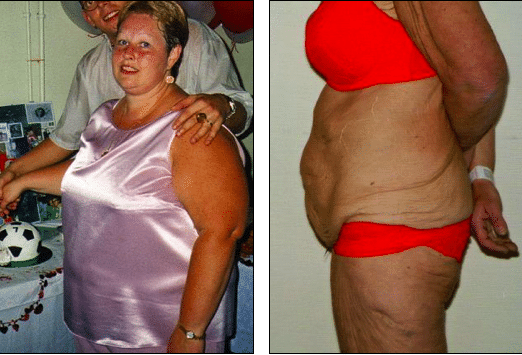 How important is it to you to get that breast lift?

They say beauty is in the eye of the beholder, which might explain why one woman still desperately unhappy with her appearance after having lost 154 pounds decided she still didn’t meet what she thought would constitute an acceptable appearance in front of other’s eyes. Or was it just her own eyes? How then to explain why Jayne Fenney decided to cash in on her home all just so she could tend to some much needed life saving plastic surgery.

The doctors told Jayne that she could expect to have to spend $47 000 to deal with all the excess skin after having undergone massive loss (could you imagine losing all that weight and still feeling that you still look worse for wear?). Except there was one problem in all of this. Jayne didn’t have a spare $47 000 lying around. All she had was her house. and that’s when the idea hit her if she just sold her house she could finance her magic new look (minus whatever her mortgage was).

Managing to sell her house for $188,000 Jayne was now finally in a position to have the plastic surgery she so desperately sought to have.

As the dailymail documents, Jayne’s operating shopping list included the following:a full body lift at £14,000, then an armlift, breast uplift and thigh lift, which came to another £16,000, making a total of £30,000.

‘I’ve swopped bricks and mortar for the body that I’ve always wanted and I don’t regret a single penny of it. Feeling great is worth ten houses.’

Hmm. Who would’ve thought? Then again with her new buff look perhaps Jayne can get herself more noticed by a certain caliber of chap who might be more ready to drop money on her had she not made the leap.

Offers Jayne: ‘I can now wear a bikini for the first time too. I’ve bought lots to show off my new figure – stripey ones, polka dot ones and I’ve got so much more confidence. I don’t cover up with a beach towel anymore – I’m proud to show off my new body.’

Then again perhaps it has nothing to do with the new opportunities Jayne’s new looks will ensure, but how much she needed to feel good about herself. After all at the end of the day Jayne still has a house to live in and a new body to show off, which points to the trade offs that we all make in life, never mind that Jayne’s trade off might seem a little unorthodox, but then again how do you value happiness?

‘It may have seemed like a drastic thing to do. i don’t have as much space as I used to, but I have a great new figure. It was the best decision I’ve ever made.’

Which is perhaps another way of saying not only are looks in the eye of the beholder, but so is happiness….