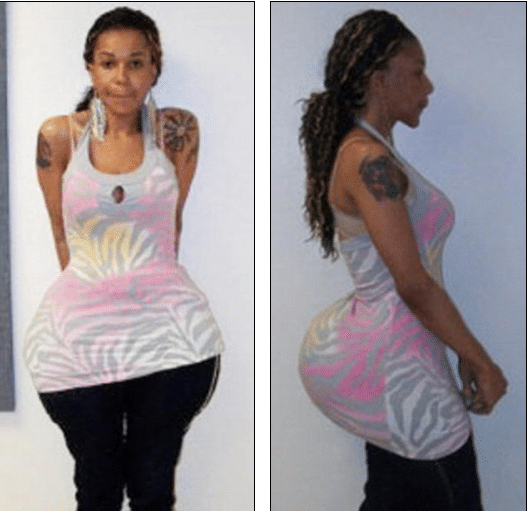 This is not the look Oneal Ron Morris was looking for after all…or was it?

What to say, what to think? A transgender woman, posing as a doctor has been charged with practising medicine without a license and causing bodily harm to a female patient after allegedly injecting the woman’s bottom with cement, Fix-A-Flat tyre inflator, super glue and tyre sealant in order to give her a more shapely rear. What though makes this story even more beguiling is the fake doctor, Oneal Ron Morris also applied the same procedure to herself. See pictures above.

According to Miami Gardens Police Department Sgt William Bamford, Morris met with as of yet publicly identified woman to carry out the procedure in May of 2010. Agreeing on the price of $700 (shouldn’t that in itself have been a tip-off with procedures like this normally running into the thousands?) the patient went on to suffer severe complications:

Said Bamford: ‘A short time later, she develops very serious pains, abdomen, throughout her body. She knows something is wrong.’

Admitted to a local hospital, the patient went on to develop an infection of drug-resistant bug MRSA at the wound and also developed pneumonia, but refused to reveal how it had happened.

Suspecting that the patient had been treated at the hands of an unlicenced practitioner, the patient had by now moved out of the region before they could elicit further leads. That of course came to a head in March of this year when authorities were able to identify Oneal Ron Morris as the perpetrator (was it the over-sized posterior that gave her away?).

All of which begs the question why are so many women exposing themselves to the hazards of garage hospital antics for the sake of achieving supposed glorified looks? Is the desire to be socially accepted and desired so great that a person would risk grave bodily harm to achieve a slice of heaven?

And like most games of Russian roulette, sometimes you’re lucky to escape the magic bullet, but eventually you or someone is bound to get the rough end of a deal. So much for looking like a dream boat, whatever dream boats are suppose to look like…