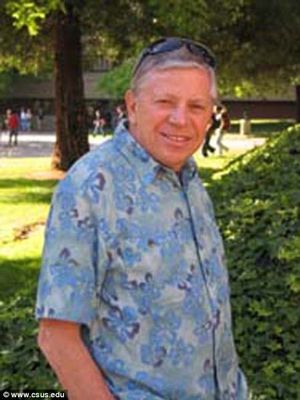 California State University- Sacramento. Professor Parrott and his students seem to be at odds with each other recently. Apparently they’re not particularly pleased with their professor’s insistence that each week 2 students be assigned to bringing in snacks for the classroom. Argues one of the students, Francisco Chavez:

‘Our education isn’t worth food, it’s for us,’

Professor Parrott who has been instituting the policy for the last 39 years in his classroom (that’s a lot of donuts thinks me…) sees it otherwise. According to him, he lays out the ground rules at the beginning of the semester:

He gives students a handout, the language of which simplifies the issue so much that full sentences aren’t even involved.

It reads ‘Not having a snack = no Dr. Parrott of TAs’ and even goes on to show pictures of ‘Good Ideas’ like fruit platters, homemade bakery items and cut vegetables, while Nabisco cookies and packaged snacks fall into the ‘Bad Ideas’ column.

The reason for such specific detail? Mr Parrott claims that the snacks allow students to maintain glucose levels which are tied to their mental acuteness.

Because it maintains mental acuteness or because it allows Professor Parrott to assert his power and authority over the students? Because he likes to force the students into an unfamiliar territory by forcing his students and teacher to inter act in a way that they are unaccustomed to and perhaps not too thrilled to have to accommodate?

Or perhaps because it allows him a free feed? Then again surely Professor Parrott can afford given his tenure to buy his own snacks, but then again he only works part time and only draws a salary of $44 000 a year (so perhaps the students suspect he is inadvertently getting them to subsidize his existence which can be frustrating when so many students pay exorbitant tuition fees and are saddled with deep debt).

In Professor Parrott’s defense he doesn’t require his students to buy textbooks which can run up to $200 or more. So in his eyes he feels vindicated with a system that he has long held in place.

As for school administrators they are said to be seriously investigating the matter, which means for now-no class and Professor Parrott probably for the first time in a long while having to buy his own snacks. Oh well…